Things that make us go … hmmmmm 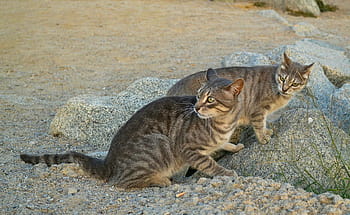 Scientists can learn a lot of useful stuff at a body farm. How the human fleshly format decomposes is a source of endless insight.

However, the boffins at The Forensic Investigation Research Station at Colorado Mesa University in the US have arguably overshared their cadaverous learnings with the wider world.

It seems the facility’s infrared cameras have captured two feral cats helping themselves to a midnight snack of rotting corpse. Ewww! Tres gross, I hear you gag. Indeed, but you may as well put a positive spin on that, right? There was still important stuff to report.

“Both cats showed preference for bodies in relatively early decomposition,” the scientists wrote in the Journal of Forensic Sciences. “Scavenging began when the bodies showed early signs of decomposition and ended at the onset of moist decomposition.”

Did we really need to know this? Apparently, yes.

Firstly, we learn that feral cats are just as finicky in their eating habits as their domesticated brethren. And by studying the cadavers after the felines were done eating, the researchers can learn more about separating a cause-of-death injury from damage done by scavengers.

“Recognising the scavenging patterns of a variety of animals is important for investigators to determine the origin of the damage and separate postmortem from perimortem damage,” they wrote.

Nutrition Webinars Coming up: Malnutrition in the Community

Clinical Disability podcast Thalidomide survivors – Where are they now?