In As a sort of diversion from our normal Saturday fare of COVID-19, government, the regulators and medical college guts and gore, this week we thought you might be interested in why medical technology companies are suddenly so hot right now, and whether COVID-19 has much to do with that.

Oops, COVID-19 again, sorry. Can’t seem to shake the thing. This is not an investment column, just a novice’s dive into the whims of medicine, technology, digital stuff and how people see value and either make money or lose it.

Since we are ultimately talking about assessing value, and taking risk, a cautionary tale might be a good place to begin.

On the Australian Stock Exchange (ASX), there are 176 companies listed as healthcare stocks of which only seven could be classed really as digital health technology companies. Device companies, of which there are many listed, aren’t included.

Our tale is about number 168, currently with a valuation (share price x the number of shares) of $8m, which was not so long ago in the top 20 of ASX listed healthcare companies with a valuation of over $600m.

Oneview Healthcare debuted with much fanfare on the ASX three years ago with a share price of $3.76. The group was developing and rolling out a cloud-based communication and application integration platform for hospitals and other large healthcare institutions. So not only could a patient watch their Netflix through it, doctors could be monitoring their patients’ vital signs through it, via the integrated hospital EMR. One communication protocol for hosptials to rule them all. Neat.

The share price rose relatively quickly to a price of $6.72 by January 2017, and then commenced a steady but irresistible slide to the disastrous present-day price of 4.5c.

As far as cautionary tales go, this one throws off a few good lessons for punters, even perhaps sophisticated punters. The  group had convinced some very well respected and large institutional investors to front up a lot of capital in the initial public offering (IPO) – about $68m. Once that happens, markets sometimes follow like sheep, assuming that a big smart group wouldn’t lay out all that capital without doing their homework pretty well. To this they added a good starting story, a couple of contracts with hospitals in big markets (the UK and US) ,a great business model (on paper), and a fair bit of well spun PR as things moved forward.

The point of failure in this particular venture seems to have been having a great story that ticks all the technology stock boxes – network-effect business model, huge unconquered digital market of healthcare, big markets, an esteemed board of directors, some great starting stats, a ground-floor platinum referece investor  –  but there was virtually no execution of the strategy to test it by the time of the IPO, or any demonstration that the grand plan was actually scalable.

Along the way were some omens: a first year where revenue reduced from $15m to $10.3m while losses increased from $30m to $40m, repeated misses of revenue forecasts, and even a CEO and chairman that were paying themselves significantly above market rate according to several industry newsletters. But the initial investors kept doubling down to meet a ballooning burn rate (how much cash you lose each year chasing the profit), and others followed. In these circumstances, companies and their officers aren’t necessarily doing anything dastardly. Sometimes the board, the founders and senior execs are all drinking from the same Kool-Aid fountain, willing the numbers to eventually turn, as a means of staving off the inevitable reality of facing up to something being fundamentally wrong. In this case it was a pretty heavy hitting board, air swinging all the way down.

OK, that’s the downside. Where tech stocks are concerned it’s been done before and will be done again. The overarching lesson is tech isn’t that easy to value, or pick. It has fundamentals and multipliers, like cloud-based delivery of software as a service, “network effects” and “digital market platforming” that are extraordinarily hard to model.

And while we’ve seen plenty of great examples  of businesses winning on the same formula in other markets we think we can take some cues from – Xero in accounting is a bit of a poster child – healthcare adds an additional layer of complexity to modelling, and hardly any company in healthcare has been to a platform type of place like Xero has in accounting yet.

But a lot are trying. And some will succeed. And when they do, the value you are going to see in such businesses is going to reflect that they managed to spike a digital platform business in the healthcare market, with giant and stable government-based revenue streams into the never never.

It’s why Tim Cooke, Apple’s CEO, came out a year ago and said that in future people would remember Apple  as a healthcare group, not a cool mobile phone, computer and content provider.

And that’s why people are going to persist with digital healthcare companies and stocks, and why it’s an interesting place to be in the next few years.

Back to Australia’s most valuable digital healthcare companies.

There are seven ASX-listed digital health technology stocks and we’ve presented their vital statistics in Table 1: 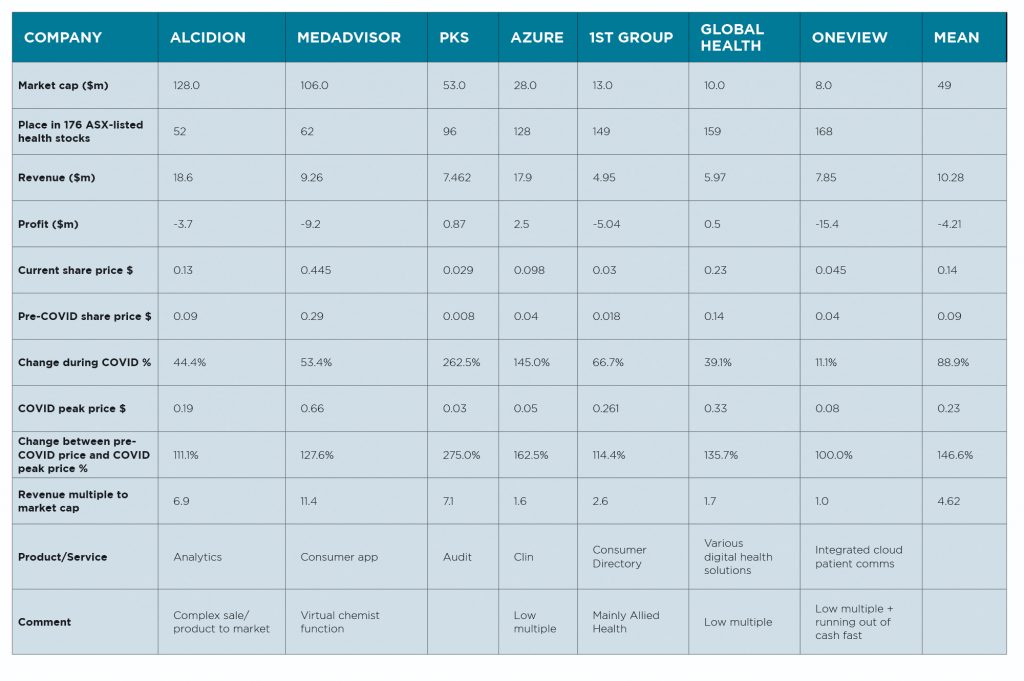 What immediately stands out is that COVID-19 (sorry) appears to have had a huge impact on the price of all these stocks. On average their share price has risen by nearly 90% from just before COVID-19 (sorry) started.

One particular stock, PKS, has increased by a whopping 265%! But that can be easier to do when your starting point is just below 1c, so it’s not that spectacular really. And if you add to this that during the period, the group acquired a reasonably good health tech company into its portfolio, which coincided with most of the increase, then the rise is even less spectacular.

Question: are these stocks going up because their products can directly contribute to ameliorating the crisis, or is there just a bit of a mania around digital health given it is playing a very large role overall in managing COVID-19 (sorry)?

A clue: of all seven ASX-listed stocks in Table 1, only one has any functionality that might directly help in the COVID pandemic, and that stock is the second-worst performing during COVID-19 (sorry). That stock is MedAdvisor.

Still, if you bought at just under 1c in late February, you’re probably pretty happy with yourself today.

If there is a bit of pandemic mania in these stocks, is their price and trend likely to be maintained?

The technical measure of actual value is the market capitalisation of the company, which is simply the number of shares held in the company times the share price. But a better measure of potential of a company is usually in the multiple of a company’s revenue to make up the company’s market capitalisation. The higher that multiple, the higher the potential. If we weren’t rounding up our figures, Oneview has a multiple of revenue under one. That’s obviously not good. It’s usually a sign of a group running out of cash with not enough runway to make a landing, which might be  Oneview’s situation. They can raise money again of course, to extend their landing capability, but at a point investors might think they don’t want to chase their losses.

At the other end of the ASX listed companies in Table 1 we have MedAdvisor with a very respectable 11.4 revenue multiple, which should indicate lots of stars aligning in terms of business model, market effects, share and so on. The other two we have with higher multiples are Alcidion and PKS, which will discuss later, as we add to our list with some educated guesses around privately held companies and their value.

Table 1 gives you some starting point for trying to value privately traded digital health tech companies. If you start with how the markets are valuing public companies and you can get some data around key company metrics such as revenue, growth, market share, and business model, then you can make some estimate of value and potential.

At TMR we’ve done that and come up with our best guess of the top 11 most valuable digital health tech companies in Australia.

Table 2 below lists the 11 candidates, their ranking and their main features.

Revenue estimates come from all sorts of intel, some from the market, some from deduction around market share and product pricing, some from statements from the companies themselves from time to time.

As in Table 1 you will see a revenue multiple, and what is important in forming the view of this is  our score of “market dynamic” for each particular company.

The market dynamic score is perhaps the most important feature in the algorithms we’ve applied here and it’s the most mysterious and deliberately oblique. Secret sauce isn’t secret for no reason, but to let you in on the ingredients just a little, market dynamic is a score given to a company based on their positioning as a service or product within the market. It assesses for features which include but are not limited to:

You will note that you can be high in the list but have a relatively small market dynamic score and/or revenue multiple of market value. This might be because you simply have more assets generating more revenue in play. But the revenue isn’t as valuable as the revenue generated by a company with much better market dynamics.

What follows is a little more logic explained per company in the Table 2 leader board. Please feel free to make corrections or suggest alterations to the methodology etc. We intend to make this league table available each year as a sort of running special update feature.

No. 2 Telstra Health (Business unit of Telstra, which is public)

No 6: Clinic to Cloud (privately held)

Disclaimer: Very obviously I’m not an investment analyst. I’m mostly just an interested and passionate observer of an interesting and fast developing sector of the healthcare market. I did once run a largish company ($90m at its peak, 350 FTEs) for many years just so you know it’s not all amateur hour. This group did a lot of digital development, and had significant digital revenue streams in its life ($50m at its peak).

Notwithstanding, I don’t have a good grounding in finance, or financial analysis. The best CFO I ever worked with, who went onto bigger and better things because he was good, would roll his eyes at me regularly and laugh heartily at any attempt I ever made to make sense of anything mildly financially complex. Another one quite correctly asserted once that my monthly management meetings, which involved quite a bit of financial scrutiny of business units, reminded him of the Cantina bar scene in Star Wars. I’m bad with simple things like balance sheets, and worse with more ethereal financial concepts like discounted future earnings, terminal value and so on. Which means, if you’re planning to use any of this as any sort of investment advice, or for research on anything, you’ll probably want to think again.

RedHerring The Back Page When even big tech feels uncomfortable …