An interventional radiology alternative to hysterectomy

Uterine fibroid embolisation, also known as uterine artery embolisation, is a minimally invasive procedure than can be performed under local anaesthetic and light conscious sedation.

Access is through a femoral artery puncture. An angiographic catheter is then guided to the left and right uterine arteries. Embolic particles (usually polyvinyl alcohol) are suspended in X-ray contrast and injected into the uterine arteries.1

Patients stay overnight in hospital and may resume normal activities in one week.

How does uterine fibroid embolisation shrink fibroids without harming the normal uterus?

The uterus is a unique organ that has an immense capacity to re-open and recruit dormant blood vessels when there is a need, typically during pregnancy. Pathologic tissues do not have the ability to reopen or recruit blood vessels. Particle embolisation of pathologic uterine tissues, such as fibroid and adenomyosis, will cause ischaemic infarction.

Does fibroid size and number matter?

Size does not matter in general. However, the larger the fibroid at baseline, the larger will be the residual fibroid volume. In most cases, the volume of the fibroid will be reduced by at least 60%. This amount of shrinkage, however, is sufficient for symptom control in more than 90% of patients.2 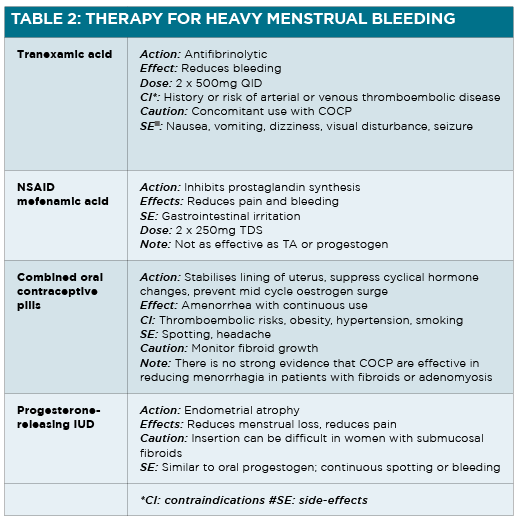 What fibroids are not suitable for embolisation ?

MRI is very useful in helping determine who is most likely to benefit from uterine fibroid embolisation. Fibroids protruding into the uterine cavity are probably best removed hysteroscopically, if less than 4cm in size. Larger protruding fibroids can be shrunk prior to resection, through treatment with gonadotropin-releasing hormone agonist or uterine artery embolisation.

Uterine fibroid embolisation should not be used for a fibroid with features suspicious of sarcoma or for an enlarging fibroid in a postmenopausal woman not on  menopausal replacement therapy.

In rare cases, fibroids will be already infarcted or very fibrous  and these are unlikely to shrink further with uterine fibroid embolisation.3

How effective is the procedure?

The results were summarised by a Cochrane Review in 2014, stating that uterine fibroid embolisation has a similar outcome compared with surgery, in terms of symptom relief, patient satisfaction and quality of life improvement.4 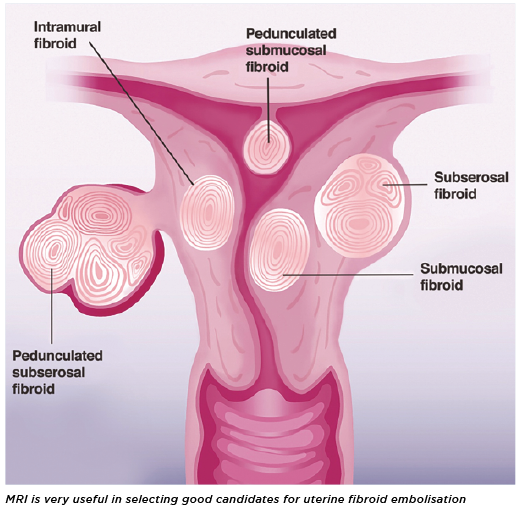 How long does it take for the procedure to become effective?

For women whose main symptom was  heavy menstrual bleeding, they should see a marked improvement at the first menstrual period post uterine fibroid embolisation. Pressure and bladder symptoms might take two to three months to resolve post-procedure.

What is the recovery like? Is the procedure painful?

Uterine fibroid embolisation itself is not a painful procedure. Soon after the procedure, however, there is usually some ischaemic pain. Many patients describe it as akin to period cramps.

Most patients describe their pain as moderate. Some women may experience   severe pain, therefore all patients are given   analgesia pre-procedure to self-administer if needed after the embolisation.

Typically, women will stay one night in hospital to recover. Most women have their pain controlled by oral analgesics and are ready to go home the following day. Complete recovery and return to normal activity is expected after around one week.

What are the side-effects and complications?

Procedure-related complications, such as arterial injuries and non-target embolisation, are very rare (less than 1%).2

Minor vaginal discharge is not uncommon. Some patients might pass small fibroid tissue fragments, if their fibroids were submucosal.

Even more rarely (<1%) complications of uterine fibroid embolisation can result in the patient needing  a hysterectomy.

Is pregnancy possible after the procedure?

Many case series suggest pregnancy is possible after uterine fibroid embolisation. There seems to be no fetal growth retardation. However, when compared with the general obstetric population, the rate of miscarriage, pre-term delivery and post-partum haemorrhage is higher in women who have undergone the procedure.5  This is more likely to be due to the underlying fibroid disease rather than the embolisation procedure.

For women with symptomatic fibroids and a strong desire for pregnancy, MRI should be performed to assess the possibility of surgical myomectomy, which is the preferred option. If myomectomy is deemed challenging or excessively risky, then uterine fibroid embolisation can be offered as an alternative, or as an adjuvant to make subsequent myomectomy possible after shrinkage and devascularisation.

Can fibroids be malignant?

Uterine fibroids are very common and can be found in 70% of women.6

Fibroids are benign and do not turn malignant.

Malignant uterine sarcomas are a separate entity and are very rare. Differentiating sarcomas from fibroids can be very difficuilt, even with MRI.

MRI with diffusion weighted imaging and increased lactate dehydrogenase isoenzymes might raise suspicion. Biopsy is not helpful in this regard.

The risk of sarcoma does not justify hysterectomy as a treatment for fibroids.

The likelihood of a sarcoma in women with a preoperative diagnosis of leiomyomas is only two per thousand, however the risk of severe complications following hysterectomy can be more than 10%.

To date, the American College of Obstetricians and Gynecologists does not support hysterectomy for asymptomatic fibroids solely to rule out malignancy.7

Rapid growth and size do not suggest malignancy. For women who desire uterine fibroid embolisation, baseline MRI to screen for suspicious features and follow-up MRI to check complete infarction should be considered mandatory. 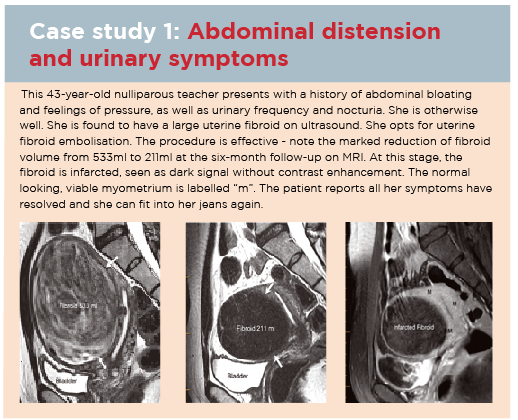 Why should women try to avoid a hysterectomy?

Hysterectomy remains a major surgical procedure that carries a mortality rate of 1.5  per 1,000 in Australia.8

Women who have had hysterectomy go through menopause almost four years earlier than women who have their uterus.9 Blood supply to the ovary maybe compromised during surgery by ligation, spasm or thrombosis.

Hysterectomy weakens pelvic supports and can cause urinary stress incontinence.10

Removal of, or division of, the ligamentous supports of the cervix and upper vagina may predispose to development of prolapse. Further, the effectiveness of prolapse repair is compromised by the removal the cervix and ligaments which are used to anchor an effective repair.

Studies regarding the effect of hysterectomy on a woman’s sex life have shown conflicting results. Women whose menstrual symptoms were severely impacting their sex lives commonly find hysterectomy beneficial.

However, other women have reported decreased libido and lower orgasm intensity after hysterectomy, especially total hysterectomy.11

This may be as a result of nerve damage, alterations to the vaginal vault, resulting in altered sensation or loss of uterine contraction, leading to anorgasmia or changes in the nature of an orgasm.

Constipation following hysterectomy is commonly reported, and may be a result of nerve damage.12

Patients who have had a hysterectomy take longer to recover than those who have undergone other major surgery. Symptoms include urinary problems, fatigue and depression. The underlying cause is uncertain and the condition has been labelled post hysterectomy syndrome.13 It is thought to be due to hormone imbalances after hysterectomy.

A recent study has shown that hysterectomy, even with ovarian conservation, is associated with 33% increased risk of  coronary artery disease, and the risk is increased by 250% if the hysterectomy is performed in women younger than 35 years.14 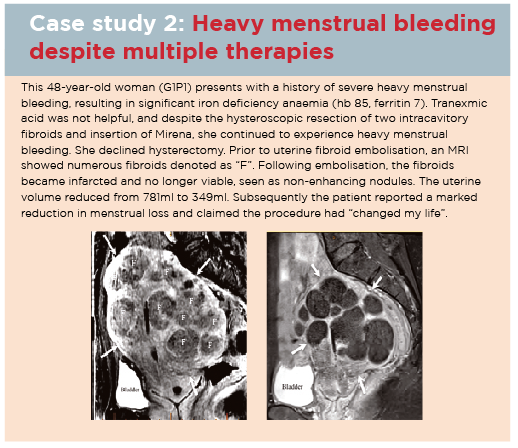 What is the advanced uterine sparing approach allowing women to avoid hysterectomy?

A new collaborative approach between a gynaecologist and an interventional radiologist can offer hope to women whom otherwise were deemed to have hysterectomy as their only solution.

Multiple large fibroids can be embolised prior to myomectomy to reduce blood loss.15 For women who wish to retain fertility, a fibroid that is deemed to be too large or too risky to resect can be treated with uterine fibroid embolisation first and subsequent myomectomy can be performed on a devascularised and shrunken fibroid.16

How should GPs assess and treat heavy menstrual bleeding?

Every women’s perception of blood loss and what constitutes a heavy period is different. A history of requiring larger pads, combined use of pads and tampons, passage of large clots, flooding and soiling are all  indicators of severity. Avoidance of social activity and absence from work are also signs that the bleeding is severe. While heavy menstrual bleeding is a common, women are often reluctant to initiate discussion of the topic with their healthcare professional. Consequently, GPs need to have a high index of suspicion and be ready to inquire about symptoms that would indicate heavy menstrual bleeding could be a problem.

The commonest cause of delayed treatment of heavy menstrual bleeding and its sequelae, and of fibroid disease, is delay in presentation to the GP by the affected woman. For this reason, every consultation with a female patient should be considered an opportunity for the GP to raise reproductive health issues with their patient. In many cases, specialist referral is not required and effective management can be rapidly initiated.

Simple medications, such as tranexamic acid and NSAID can be used to reduce heavy menstrual bleeding.

A progestogen can be added to arrest acute bleeding or taken continuously to avoid a period. Combined oral contraceptive pills are commonly used to reduce heavy menstrual bleeding.

Fibroid growth should be monitored while on combined oral contreaceptive pills. The progesterone-releasing IUD (Mirena) might help to reduce heavy menstrual bleeding if the device is able to be inserted and the fibroids have not distorted the uterine cavity.

All the above treatments will help with heavy menstrual bleeding  but will not reduce fibroid size. Consequently, pressure and bladder symptoms are likely to persist.

Uterine fibroid embolisation is a minimally invasive angiographic procedure that has been proven to be safe and effective to treat fibroid related symptoms.

It is performed under local anaesthetic, requires one night stay in hospital and one week recovery.

It is most suitable for women who wish to avoid a hysterectomy.

Uterine fibroid embolisation can also be combined with surgical techniques to treat women with symptomatic fibroids who also want to preserve their uterus, whereas previously their only option for treatment was hysterectomy.

Dr Eisen Liang is an interventional radiologist; Dr Bevan Brown is an obstetrician gynaecologist; together they founded Sydney Fibroid Clinic. They have collaborated for more than 10 years in helping women resolve fibroid and adenomyosis related symptoms using minimally invasive procedures to achieve uterine preservation. Their research papers on fibroid disease and adenomyosis have been presented internationally and published in ANZJOG.