If there was bootcamp for RACGP presidential nominees…

Who would likely drop or be kicked out if it were run, SAS-like, in search of only those who can and should serve?

Rather than continue to whine about the dysfunctional manner in which the RACGP picks its presidents and what little meaningful bandwidth it gives them to work with, this week we’ve decided to channel a little R. Lee Ermey.

Let’s imagine what it might look like if, to become a presidential nominee, you first had to make it through bootcamp.

RACGP Presidential Bootcamp (RPB) only has one goal (sounds a bit like Fight Club but it isn’t): to filter for candidates who can significantly influence the powers that be in Canberra, to get the GP profession where it needs to be at the centre of Australia’s healthcare ecosystem, and to have the profession properly and efficiently remunerated. In just two years.

You don’t get into RPB by just having your nomination seconded. You will need to do a half-day course on being a company director, followed by another half-day course on reading and understanding a balance sheet and one last half-day on sales and negotiation. As in most reputable learning institutions, in RACGP Bootcamp you can submit relevant work experience and get out of having to do one or more of your pre-requisite courses.

When you’ve completed each course or proven your competence in each area another way, you need to do a basic 360-degree leadership test.

There is no pass or fail on the 360 test. It will just help your drill sergeant understand where you are coming from a bit better so they can tailor your bootcamp experience accordingly.

Most people who’ve worked for a large and inefficient corporate would be familiar with these leadership 360 evaluations (they are used in 90% of the top 500 Fortune companies), either as a report to a boss, or as a boss themselves. They involve you getting feedback from (as applicable) work peers, people who work for you, your own boss, and if feasible, even your own partners or kids. You do the same survey and your response is charted against those around you so you can compare the differences. A typical example of a business leadership one is below with the blue representing the surrounding input and the black line the manager herself. Where the blue exceeds the line is where peers et al think better of the survey candidate than the candidate themselves, and vice versa.

Depending on what sort of organisation you are working for, the categories of skillset or character traits can vary. For the RPB test, the segments are resilience, creativity, listening, negotiation, integrity, self-worth.

You’ll note that some of the segments in the classic business leader chart reproduced below are missing here and you might wonder why.

Leadership: is useful of course, but who would a president be leading in the context of the role as it currently stands?

Strategy: Mostly the strategy for an RACGP president is simple and already very clear. 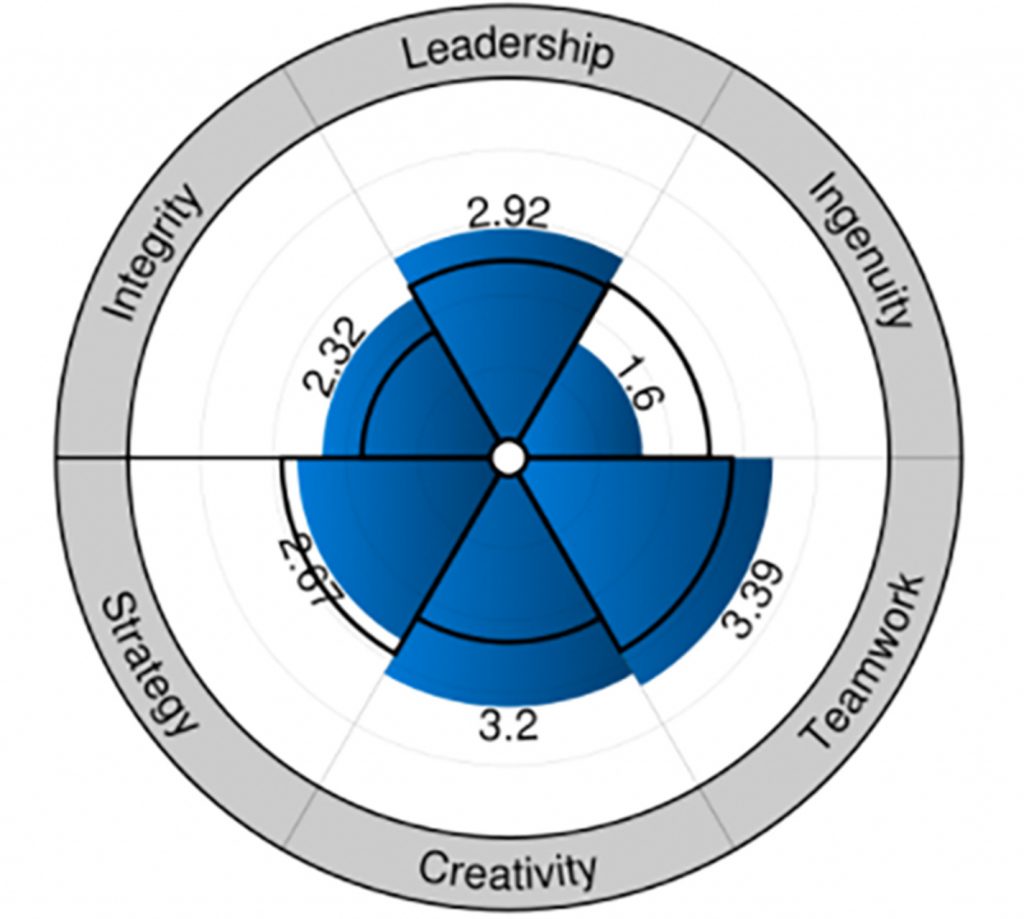 One of the advantages of the RPB 360 survey is that it can be self-filtering.

I’ve seen very senior and confident business managers go their corner office and cry uncontrollably for hours when they see their results. It might jolt one or two bootcampers to rethink what they are doing before they actually go to the time and effort of bootcamp itself.

Here’s a few sample questions. Remember, all up there are about 120 questions your peers et al. have to complete and some of them get a bit rougher than these. Think about them and what those around you might say, or even what you think when you’re being honest with yourself.

Tick one of the following for each statement below: 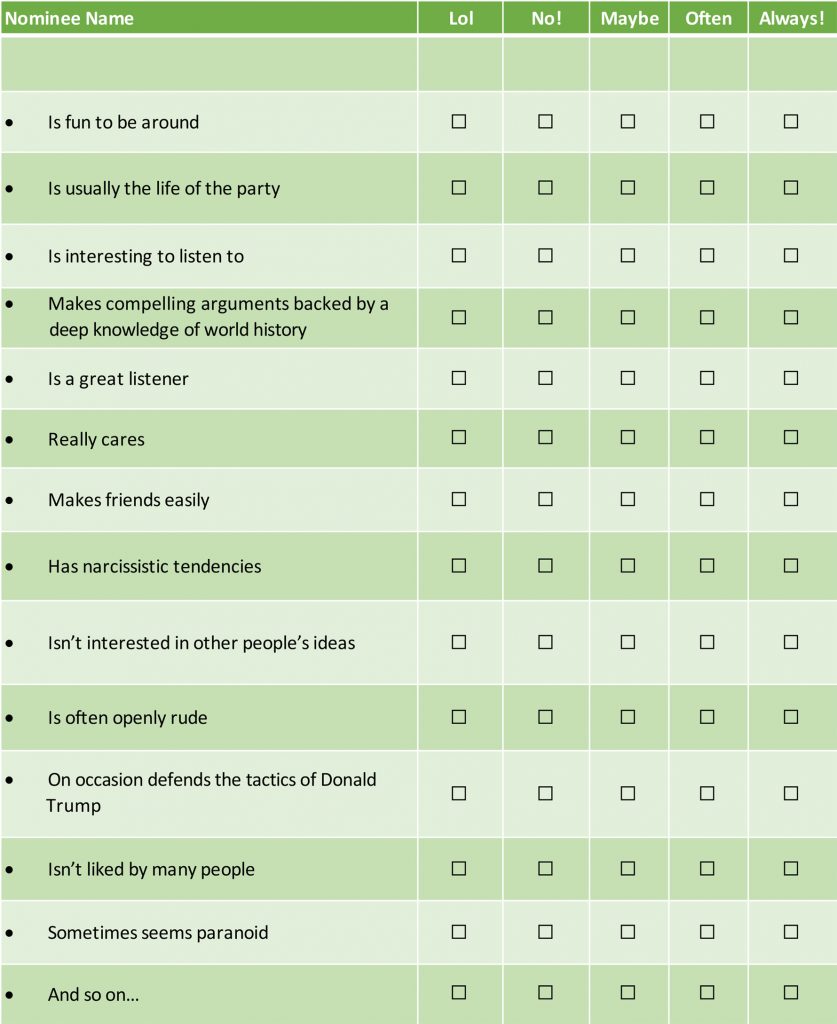 OK, you’ve done your courses, or demonstrated equivalent practical experience, and completed your 360 test, and you are still happy to proceed to bootcamp.

What can you expect?

Frankly, possibly nothing like you might be expecting if you have read or listened to interviews with each of the candidates.

At least, not in this year’s bootcamp.

One encouraging aspect of all our current nominees is that they all appear to be nominating primarily out of desire to catalyse change and make things a lot better than they have been. That might seem an obvious motivation for any nominee, but the past has been littered with journeymen, ticking the CV and prestige box, on their way to what they perceive as bigger and better things.

Not this time – most of the current crop seem possessed of a pretty raw desire to make some important changes.

Desire, of course, is not enough.

Most of the candidates have in some way or another conveyed their view that to be president they are going to have to display diplomacy, toughness, humility, peacekeeping skills, strategy, inclusiveness and teamwork. Sort of a cross between Jack Welch, Nelson Mandela, General Norman Schwarzkopf and Kofi Annan.

But after the first hour of bootcamp, in which there is much standing to attention, doing push-ups and high-pitched screaming from the drill sergeant, they will have these skills expectations robustly revised. It’s a hint that the job may not be all that was advertised. Without wishing to spoil the fun drill sergeant will outline in that first hour that only the following character traits or skills will be required:

Once this is brainwashed into you (usually takes a few hours of repetitive screaming and sometimes, a bit of metaphorical waterboarding), the rest of bootcamp is fairly simple.

Your mission, if you choose to accept it, will be to get to Canberra, charm and manipulate your way into the trust circle of the Minister and Secretary of Health, and a list of other significant high-level bureaucrats, politicians, personal assistants, press secretaries, partners and the like (there’s a long list). You will only have about six months to achieve your first objective, because then you’ll only have another 18 months to leverage that position into changes to policy, regulation, and perhaps even legislation. Bootcamp has various training modules for getting the most out of late dinners in Manuka, or gate crashing the department of health, and so forth.

You can see just how hard your mission is now put in these simple terms.

Which means all the other stuff you’ve said to members you’ll be doing, or that the college expects you to do – attending board meetings and influencing the executive in a meaningful way, meeting with the members, working out how to take on approximately $140m of registrar training management effectively over the next three years without blowing the whole college up, retaining members and revenue as the college CPD monopoly disappears over the coming year, and attending formal college functions – isn’t really in scope.

This particular part of bootcamp is the hardest part to get through. This job isn’t at all what you imagined – or at least it isn’t what you said you imagined when seeking nomination and votes.

Because you really only have one job: the Canberra job.

It’s getting Canberra to recognise that government is sleepwalking our healthcare system into near-term dysfunction if it thinks it can keep treating general practice as it has in the past two decades, fobbing it off as some sort of small business lobby.

There are actually quite a few people in Canberra who understand how critical general practice is to our healthcare future. But nearly all of them have some form of constraint – political, career, commercial and so on. Even the Health Minister probably understands all the logic of acute versus chronic care shift, and the need to distribute and connect care outwards into the community far more effectively. General practice is out there in the community already, in position, waiting to be supported, and connected… and paid just a little bit better perhaps.

You are going to need to work with the right people to navigate general practice into a better position while not perturbing subtle well understood rules around political expediency and the personal goals of selected players. Like most good secret agents, you will from time to time need to have someone “rubbed out”. But your training will make sure the blame never accrues to you or your organisation.

“As an RACGP president,” screams your drill sergeant, “you WILL be our Minister’s best friend and confidant, be there for them in their time of need. You WILL make them make the cabinet and the prime minister understand what is going on. You WILL drink with them if need be, confide with them, metaphorically sleep with them if you have to (in metaphorical separate rooms of course). Failure is not an option!”

But you will be.

And if you can get Canberra under your wing, and show even a little progress, who is really going to arc up here?

My guess is the RACGP wouldn’t care if you didn’t show up to most board meetings if you could achieve any of this. It wouldn’t be like you went AWOL or anything. You’d be sending lots of dispatches from the front (Canberra) so the executive and others could follow progress and send you supplies and reinforcements from time to time (more bottles of St Henri’s perhaps for secret dinner meetings?)

And if the new CEO is any good (he looks great on paper, and it’s a fresh start so fingers crossed here), then most of that difficult and important businessey, governance, education and training stuff will be handled appropriately. He could perhaps contact you occasionally on his shortwave radio to check your views on some of the more major strategic developments in this regard, and you could provide vital intelligence from the front on how his ideas might fit into the big picture, which is getting general practice properly positioned on the political map.

And if you’re wondering where I got this crazy idea – not the bootcamp part, but all the stuff about how there is only one job for an RACGP president at the moment – it was over a coffee about six weeks ago, with a very engaged, motivated, influential and illuminating president, Dr Harry Nespolon.