‘A terrible, terrible failure’: Richard Horton on the COVID-19 response 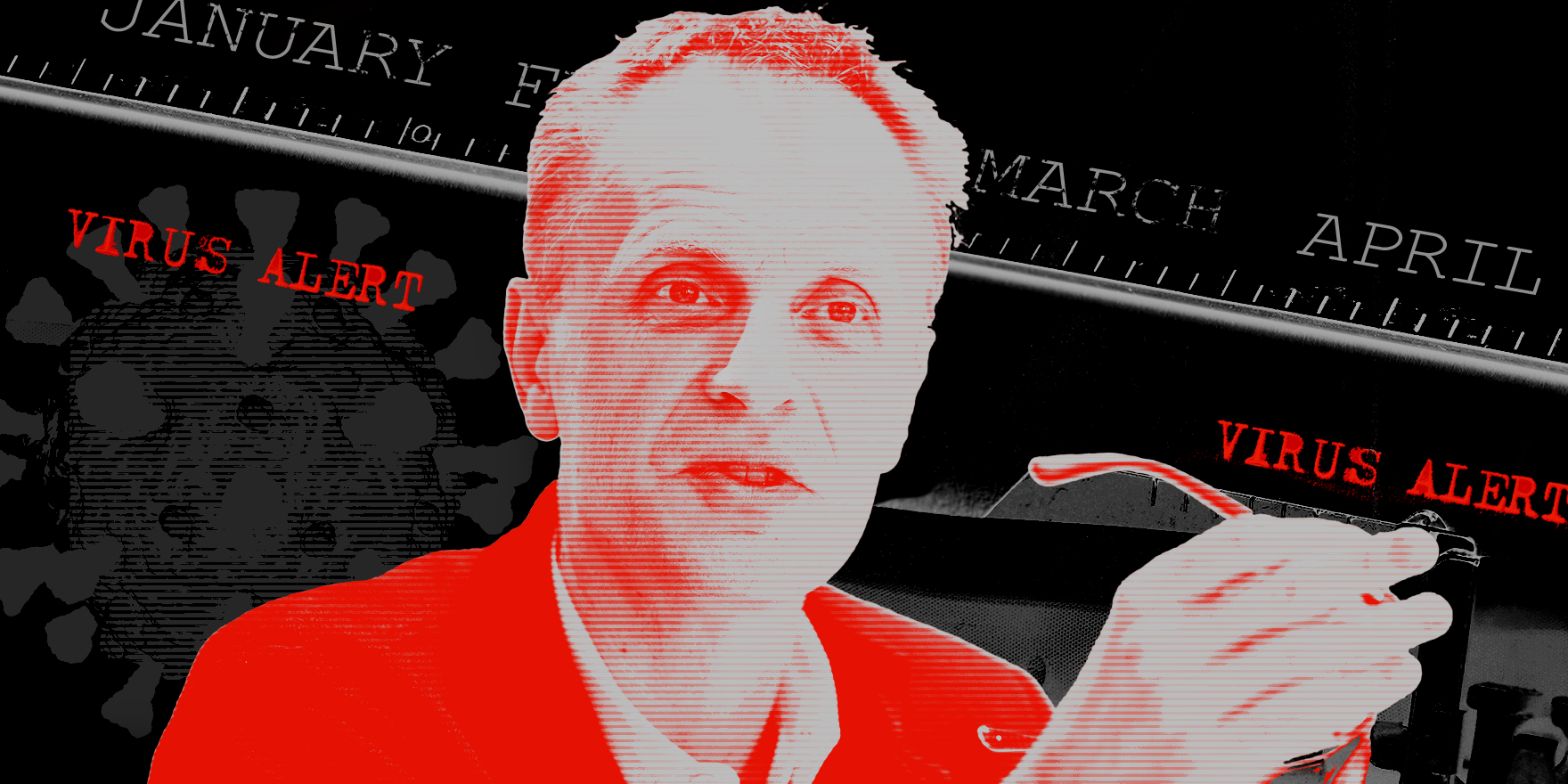 Early in the COVID-19 pandemic in the United Kingdom, the editor-in-chief of international medical journal The Lancet began receiving messages from frontline healthcare workers. Increasingly terrified and desperate staff with inadequate or no PPE were being sent in to deal with what was clearly a deadly virus.

“I would wake up in the morning, and then I would have 20 messages from people who were saying they were like lambs going into slaughter,” Horton says.

The Lancet had just published five papers – all in late January – which set out very clearly the nature and scale of the threat from the 2019 novel coronavirus, or 2019-nCoV.

One of these papers could not have been more explicit in its warning. Based on data from just under 200 confirmed cases of the illness in Wuhan, China, researchers estimated the virus was spreading on average to 2.68 individuals from each infected person, and the epidemic doubling time was just over six days.

The authors’ assessment was frightening: that human-to-human spread was already well under way across China, in cities that were global transport hubs connected to metropolises around the world. “Preparedness plans and mitigation interventions should be readied for quick deployment globally,” the authors wrote.

A second paper reported that of 41 patients admitted to hospital in Wuhan with confirmed infection, one-third required intensive care, one in ten ended up on ventilators, and six died.

“The evidence was there in January about the severity of the disease,” Horton says. As hospitals began to be overwhelmed, as bodies began piling up, as healthcare workers started screaming for help, he kept coming back to those papers.

“What struck me in March and April was just the sheer gap between what we knew in January – in January, for heaven’s sake – and the fact that nobody did anything through February and early March.

He channelled that fury into a blistering but forensically detailed 35,000-word book titled The COVID-19 Catastrophe, written in just one month.

As he speaks on Zoom from London, it’s clear that venting his very well-informed spleen has not diminished Horton’s frustration. “Our country’s in a bit of a mess, to be honest: it feels like we’re on the edge of a precipice,” he says. “I am not seeing governments recognise the reality that we need to do things differently.”

Quite a few actors on the COVID-19 stage cop a blast in Horton’s book, but he is most scathing about governments, and their “miserable failure” (p35) to respond effectively to the pandemic.

“The most important reason for the widespread complacency across much of Europe and North America was that political leaders underestimated the danger,” he writes. “They could not believe that a virus that originated in a Chinese city they had probably never heard of could have such calamitous effects in their own communities.”

It wasn’t like the concept of a pandemic was unknown. Three years earlier, the UK government had undertaken a scenario planning exercise for a pandemic influenza outbreak, which had highlighted the nation’s lack of preparedness for what was deemed the most severe civil emergency risk to society.

And despite accusations from some nations – notably the US – that China concealed the severity of COVID-19’s early impact on its citizens, Horton says the heads of China’s medical research institutions and authorities were just a phone call away.

“It’s a small group of people, they all speak English very well; we could have dropped an email to George Gao [Director-General of the Chinese Centre for Disease Control and Prevention] and said, ‘Hey, George, what the hell is going on?’,” Horton says. Where were the diplomatic inquiries from nations with embassies and ambassadors in Beijing, reaching out to figures like Gao or Chen Wang, president of the Chinese Academy of Medical Sciences and a respiratory physician? “It’s a diplomatic failure, as well as a political failure and a scientific failure,” Horton says.

On the subject of scientific failures, Horton is reluctant to criticise his fellow scientists and healthcare professionals, but says the community does have to shoulder some responsibility.

For example, the “Byzantine” structure of health advisory bodies in the UK meant there was no single voice to government, and no one person or department in charge of the nation’s response. And while he believes the World Health Organisation generally did a good job in responding to the pandemic – for example, moving relatively swiftly to declare a Public Health Emergency of International Concern on 30 January – he is critical of the fact that WHO then left nations to come up with their own strategies to respond to the threat.

“What should have happened in the first week of February was, having declared this emergency, to convene countries together in an emergency World Health Assembly to say, ‘okay, we need to work together, we need a global response’,” Horton says. “And that, in retrospect, was a terrible, terrible failure.”

Another massive failure was – and still is – a failure of communication. Horton recalls the clarity, frequency and firmness of health communications in the 1980s about the AIDS epidemic, which he describes as “a triumph of public health”. The contrast with the messaging around COVID-19 could not be greater.

“In this country now – and I when I look around the world, it’s no different – the messaging is not clear, the messaging is not frequent enough, and it’s not firm enough,” Horton says. “That communication failure has meant that the public, they’re not getting the message that this is something that’s serious.”

Shadowing the pandemic has been what WHO calls an infodemic; an overabundance of information that makes it hard for people to find reliable and trustworthy information, and which aids the spread of misinformation. That lack of consistent, coherent information has undermined trust in government, Horton says. But it has also eroded trust in science and scientists.

Even The Lancet was bloodied in this information war, when a major paper it published on the anti-malarial hydroxychloroquine as a COVID-19 treatment was revealed to be based on fabricated data. “It probably was the worst moment of the last eight months, actually,” Horton says.

His strongest emotion around that scandal – which also saw the New England Journal of Medicine retract a paper from the same authors – was disappointment. “This whole system of science depends upon trust,” he says. Scientific journals don’t examine the raw data for the papers they publish because it would be impossible to do that for every single paper. So the system relies on trust, and that trust was betrayed.

It could not have come at a worse time, given the firehose-like rate with which scientific papers on COVID-19 were being generated, submitted and published. “Certainly the research that I’ve seen come through The Lancet, there’s been a lot of quick and dirty work that’s been done,” he says. Researchers were rushing to get even the most preliminary of hypotheses out into the public domain but some of it has been too quick and too dirty. But he’s also impressed with how science has risen to the occasion. “I’ve never seen science respond so rapidly and dramatically and with such agility to a crisis, as I’ve seen in the last six months.”

By necessity, journals like The Lancet have had to trade some of their usual publishing rigour for speed. “In the acute phase of the pandemic, we were willing to take more risks,” Horton says. “We have to judge, is this so important that we should take the risk or not?”

That urgency has abated slightly, but Horton is still a little battle-scarred. “You’re constantly worried about making the right call on papers because you don’t want to be a barrier to information getting out onto the front lines of the response, if it can inform that response helpfully,” he says. “But on the other hand, you don’t want to publish something that ends up being wrong.”

That wariness was felt keenly when the journal received the paper from Russian researchers on their COVID-19 vaccine trials. “I was worried sick about that,” Horton admits. His lack of familiarity with the Russian scientific establishment, Russian president Vladimir Putin looming large over the whole affair, and the recent attempted assassination of Russian opposition leader Alexei Navalny all weighed heavily on Horton’s mind.

“I’m thinking, do we really want to publish this paper on this Russian vaccine at this particular moment? How sure can I be?” Then the peer reviews came back favourable, the paper was revised, and resubmitted, then published on 4 September.

The pandemic, and government responses to it, have also prompted some heavy-hitting editorials by the journal. One particularly direct editorial on May 16 criticised the Trump administration’s attacks on the US Centers for Disease Control, and called on Americans to “put a president in the White House come January, 2021, who will understand that public health should not be guided by partisan politics.”

Some were surprised that a medical journal should be so political. Horton says The Lancet was founded not just as a journal for publishing medical science, but also to inform and reform the health system. It’s not the first time the journal has gone after a US president in such a direct fashion – it took George W. Bush to task over the war in Iraq, and also waded into the Israel/Palestine conflict – but Horton admits “it gets us into trouble sometimes”.

However, his outspoken presence on Twitter suggests Horton is comfortable with stirring up that sort of trouble. “I think that’s a good thing, because our role is also to hold governments accountable for what they’re doing around the health and well-being of people.”

As the death toll mounts around the world, it’s clear that at the heart of Horton’s fury is a core of grief and sorrow. The book is dedicated “To those whose lives were lost to COVID-19”.

“What this pandemic has done is to hold a mirror up to society,” Horton says. “We’ve now seen people who are the most vulnerable; whether it’s key workers who kept society going while the rest of us stayed at home, whether it’s Black, Asian and minority ethnic communities, women and children who [have] seen this shadow pandemic of domestic abuse and violence.” It’s also the elderly, who have been abandoned to die in care homes.

The pandemic has highlighted deep fault lines of deadly inequality that run through so many nations.

This reflection of our society isn’t one to be proud of, and Horton argues certainly isn’t one that we should strive to return to after the pandemic is over. “Now that we’ve seen that, it’s seems to me impossible that we can just talk about returning to pre-COVID normality,” he says. “There’s something fundamentally gone wrong in our society, and this has been revealed to us by this pandemic, so now is an opportunity for us to really try and tackle this.”