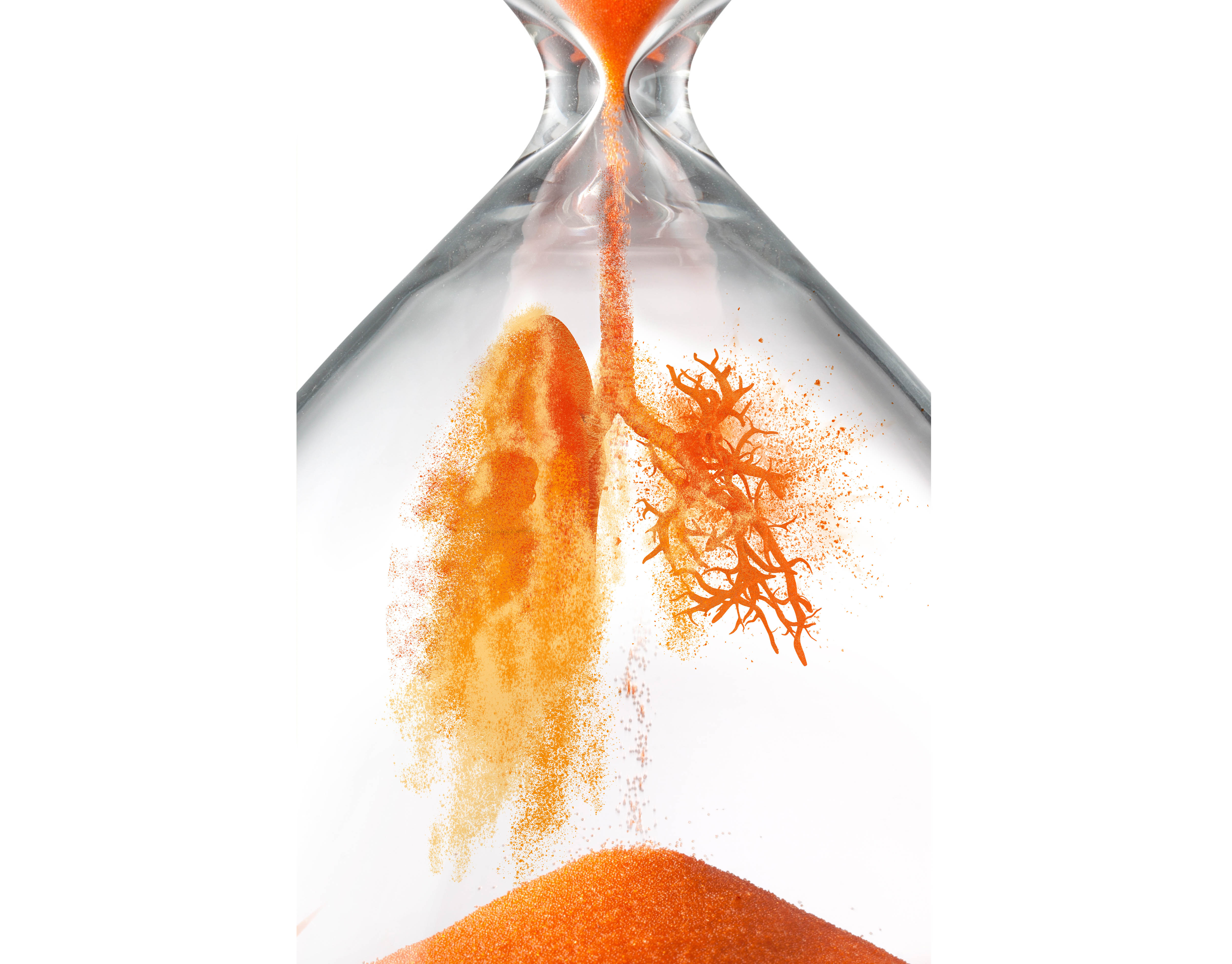 For some survivors, COVID-19 may outstay its welcome

A Sydney study is looking at the long-term effects of COVID-19 infection on the lungs, and elsewhere

Around the world, more than 1.6 million people have now recovered from COVID-19. But are they off the hook, or could the infection leave long-lasting, or even permanent, traces in some patients?

While most of the focus is understandably still on transmission, symptoms and mortality, one Sydney-based trial is looking ahead to long-term outcomes for those who survive the illness – not only pulmonary but also immunological and psychological/neurological sequelae.

The ADAPT study run by St Vincent’s Hospital is a prospective cohort study that aims to capture every COVID case in the hospital’s catchment area.

Respiratory physician Dr Anthony Byrne, who is on St Vincent’s COVID team, says the study will divide patients into severe and non-severe phenotypes, based simply on whether they are admitted to hospital or managed in the community.

“We know from other respiratory infections that they can result in long-term lung function impairment, and structural lung disease: bronchiectasis, bronchitis, fibrosis, atelectasis. In TB and others you can get cavitation and chronic fungal disease. So there’s a precedent for thinking that this could happen in COVID.”

The hospitalised patients in the study will have chest CT scans and undergo complex lung-function testing, comprising spirometry, plethysmography and diffusing capacity at one month, four months and 12 months.

The non-severe cohort will have the lung function assessments at four months. If they are abnormal they will be followed up with more testing and CT scans for a year.

Dr Byrne says CT scans have been crucial diagnostically, since the virus can move from the upper airway into the lower airway, evading the PCR swab.

“We’re more appreciative now of the fact that the COVID PCR test can be wrong,” he says. “We certainly had patients that had negative swabs initially and then had positive swabs. That’s where the CT became really important.”

He says the extent of the radiological changes in the lung parenchyma corresponds well to the severity of illness and hypoxia in the patients, “as you would expect”.

“Based on their imaging, with ground-glass changes affecting both lungs in the bases, what I would expect on their lung function is that they’ll have a restrictive abnormality, they’ll have reduced functional lung volume.

“Perhaps that deficit will improve over time, but it may not improve to a normal reference range.”

The team will also look at diffusing capacity, which can be reduced when the parenchyma are damaged and also in pulmonary hypertension, and use cardiac ultrasound to test pulmonary pressure.

The study leaders hope to recruit 200 to 300 patients over the next 12 months, and may also look retrospectively at patients already diagnosed.

Dr Byrne echoes the semi-lament of many other Australian researchers who have designed studies in the expectation of a large local epidemic: “We’re in this situation – which is a great situation to be in – where we’re all set up and we don’t have any patients.”

Both SARS and MERS left some patients with long-term respiratory symptoms and corresponding radiological changes. Early in the epidemic in China before widespread PCR testing, CT scans were the main diagnostic tool in hospital cases, so the radiological characteristics of COVID-19 infection are well described.

Dr Catherine Jones is a Brisbane-based subspecialist chest radiologist and the clinical director and head of thoracic imaging at I-Med Radiology Network. She is on the executive of the Australia and New Zealand Society of Thoracic Radiologists and wrote the COVID-19 guidelines for the RANZCR.

“Within the first few days after the onset of symptoms, a slight majority of patients will still have a negative CT,” she tells The Medical Republic. “By day four, most patients have some changes on the X-ray and the CT, and by day six, your CT findings will be typical of COVID – or at least be significant enough to raise that as a possibility.”

The typical changes are ground-glass opacities ­– cloudy patches indicating infiltrate in the alveoli – peripherally in both lung bases. The patches are less dense than the consolidation you would see in bacterial pneumonia, Dr Jones says, but slightly more defined than pulmonary oedema from, say, heart failure. They sometimes progress to consolidation.

This is similar to SARS and MERS, except that in COVID-19 the changes are almost always in not one, but both, lungs, and usually at the bottom of the lung.

“You can also get what we call a mixed pattern of disease, where you have consolidation around the edge of a halo and less pronounced consolidation in the middle – that’s a less common presentation but it is suggestive of COVID-19,” Dr Jones says.

“Ultimately, the features of COVID-19 mirror those of any viral pneumonia, so it would look similar to SARS, swine flu or H1N1, and it would also have overlapping features with influenza, which is a major concern when we’re heading into our flu season.

“If you have a single focus of consolidation, either in a lobe or in a segment of the lobe, then  you need to think about other causes, such as bacterial pneumonia.”

Dr Jones says GPs should refer anyone with a worsening clinical picture for chest imaging, but include as much information as possible while requesting – local prevalence, risk factors, positive PCR, contact with a known case – to help inform the report.

Efforts are being made around the world to develop models that can predict a patient’s disease course from their early imaging, says Dr Jones, who is working on one such project with the University of Sydney.

She says of the roughly 20% of cases who end up in hospital, about a fifth will require ventilation.

“Those people are the ones that we worry about having a prolonged or severe course of infection,” she says.

“When we do follow-up CTs we are seeing a percentage of these people presenting with ground-glass changes in the early stages, moving to a more consolidated picture by about day 11 to 15.

“Then by about day 25, people go one of two ways. Either they start to resolve, so the consolidation goes back to ground-glass and then dissolves away and doesn’t leave any significant structural changes in the lungs.

“But there’s a minority of these people who will develop organising pneumonia, which is a general response to many different triggers, including infection.”

Organising pneumonia is a defence mechanism in which cells in the alveoli become granulomatous. It can be treated with steroids when it presents early.

“The lungs have only a couple of ways of responding to insults,” Dr Jones says. “One is to fill with fluid and that’s pulmonary oedema. And another is to have more of an organised response to attack the pathogen causing the insult. In this case, because this is a viral infection, which is initially inhaled, you may see changes around the airways, and as the infection becomes more established, you will start to see more of a peripheral multi-focal organising pneumonia pattern.”

While many patients who get to this stage will have no long-lasting effect, she says, some will develop fibrosis.

“One of the ways to resolve that pneumonia is to form scarring in the lungs. And so, in a small minority, less than 5% of people who have required hospital interventions, I would expect to see long-term effects of organising pneumonia like we would for any other severe viral infection. That would mean a predominantly basal and peripheral form of fibrosis.

Pulmonary fibrosis was one of the more severe long-term consequences of SARS and MERS, and it wouldn’t be surprising to see it in a minority of COVID-19 patients, says Dr Tamera Corte, head of the Interstitial Lung Disease unit at Royal Prince Alfred Hospital in Sydney.

“When someone has a severe chest infection and acute respiratory distress syndrome, which lands them in intensive care on a ventilator, there can be some longer-term damage,” she tells The Medical Republic.

“Essentially, it’s scarring of the lungs, which occurs usually in the intensive-care setting and can sometimes improve up to over the next 12 months but often leaves people with a long-term sequelae. I expect there’ll be a small percentage of patients [for whom this occurs].”

For the patient this would mean living with a dry cough and greater breathlessness.

It’s not possible to predict during the acute stage whether it will lead to chronic fibrosis, however.

“If you are admitted and it’s the first week of you developing the virus and you have a CT scan with those scary-looking changes, it’s really impossible to know what is going to happen in the longer term,” Dr Corte says.

“I think if you do the CT three months down the track and those findings were there, then we would have a little bit more ability to predict what was going to persist or not.”

There is a window from the onset of ARDS after which it is likely scarring will be permanent, she says.

“From the time when the ARDS is first identified in intensive care, there is a period of time, usually approximately 12 months, where patients can recover and improve. But then after around 12 to 18 months, there’s usually very little change.”

At that point, there’s little that can be done beyond supportive management with pulmonary rehabilitation and oxygen – although there are now scores of trials of anti-fibrotic medications, such as nintendanib and pirfenidone, in COVID-19 patients around the world, according to the WHO clinical trials registry.

The patients with the usual risk factors (age, cardiovascular comorbidities, et cetera) for severe COVID-19 disease are also those most likely to be left with fibrosis, which is directly related to the amount of lung damage during the acute phase of the infection ­– it will not lie in wait after a mild bout of the disease.

“If you get the coronavirus mildly, you’re not going to suddenly develop post-coronavirus pulmonary fibrosis,” Dr Corte says. “You have to be very sick and in intensive care to be at risk of that.”

Pulmonary fibrosis is a disease with a number of distinct subtypes with different causes – including asbestos exposure or an autoimmune condition like scleroderma – which behave differently. Idiopathic pulmonary fibrosis, with no known cause, is always progressive with a mean survival of two to five years.

Patients “become progressively more breathless, more oxygen dependent and less able to walk around as much, get a dry cough, end up on oxygen and ultimately die”.

But there’s no reason to think chronic pulmonary fibrosis after a COVID-19 pneumonia will take that course, Dr Corte says.

“They might look similar on a CT scan ­– so it might be really important to tell the doctor you’d been unwell with the coronavirus so that you weren’t misdiagnosed with idiopathic pulmonary fibrosis.”

“It’s not something that I’d expect to see in a controlled environment and in someone with previously normal lungs,” Dr Corte says. “People are very aware, especially in the coronavirus environment, of not over-ventilating people.”

Even without direct damage, people who have been on mechanical ventilation may require weeks or months of rehabilitation to counteract the effects of sedation and muscle wasting.

And it seems likely that the aftermath of COVID-19 will extend well beyond pulmonary damage that you can see or measure. Recovered patients in Italy are reporting a host of diffuse symptoms that last well beyond the acute phase, including fatigue, pain, shortness of breath, anosmia and ageusia, and gastrointestinal problems.

It’s almost as though SARS-CoV-2 is determined to add to the burden of disease in any way it can.