The security guard’s a distraction from Victoria’s real problems

When worst-case scenarios start unfolding, as they have recently in Victoria, even politicians realise they need to accept some responsibility and blame.

So when Victoria started moving into a serious second wave weeks ago, the main culprit became a simple mistake in managing quarantine in hotels. If you ask the public, or most doctors, the biggest reason for the size and speed of Victoria’s second wave, this excuse will usually be offered up.

Then yesterday, Premier Daniel Andrews fronted the cameras with a misdirection ploy that would make Penn and Teller blush. He accepted full responsibility for quarantine security guard debacle.

What follows such misdirection is simple.

We made a mistake, I accept responsibility, we are all in this together, and we have learnt from it. Now we can move on!

Some sectors of the media and some of our real pandemic experts – who are thin on the ground for obvious reasons – have pointed out, without much fanfare or effect so far, a much more sinister underlying reason for the extent and severity of the situation in Victoria. And Andrews, as a past health minister of Victoria, would know all too well what the real problem is.

It’s a state healthcare system set-up that is antiquated, broken and underfunded. There is little effective relationship between tertiary, primary and allied care. There isn’t any meaningful underlying structure to manage population health. It is highly centralised in management, yet at the same time highly fragmented with 88 separately managed hospital districts that don’t overlap logically with PHNs. Overall, there is very little room, resources or capability to communicate to and mobilise communities.

Being able to engage with and manage the outer edges of your constituency – culturally and linguistically diverse (CALD) communities, the socially isolated and the disadvantaged – is health system 101 these days.

There is a long history of Victoria bucking the trend towards more distributed control and resourcing of healthcare management into the community. NSW and Queensland, both comparable states in terms of resources, demographics and community needs, have much more vertically integrated structures: their state-administered health districts overlap logically with Primary Health Networks (PHNs), and the PHNs are resourced to engage with the local community, researching population needs by region and co-ordinating upstream with the hospital sector. They have health units funded and distributed throughout their communities linked by PHNs back to health districts so the system is at least a little aligned.

It’s not hard to do the math on that. PHNs are huge variable in how professionally they are managed, and can be hit and miss. Victoria has a couple of good ones, but even they struggle with a hospital setup that is almost impossible to co-ordinate with.

The problem in Victoria was so obvious that more than a year ago, its own peak health body, the Department of Health and Human Services (DHHS) put together a document comparing itself with NSW and Queensland. The document was ostensibly designed to put pressure on the federal government for more funding for Victoria. But such is the situation that the DHHS started to point out in that document significant cracks in its own system.

A report in Nine newspapers last week revealed parts of the document (which is DHHS-confidential apparently) and related concerns of sources inside the DHHS who were sounding the alarm around how unprepared Victoria really was for COVID-19.

“PHOs [public health officers] in the CDPC [Communicable Disease and Prevention Control] Unit in Victoria have been managing much higher case load numbers and had higher population ratios than similar staff in other states and territories, with the number of PHO staff in Victoria half the size of … [NSW],” the document warned.

The following two graphs were published by The Age to emphasise the point. 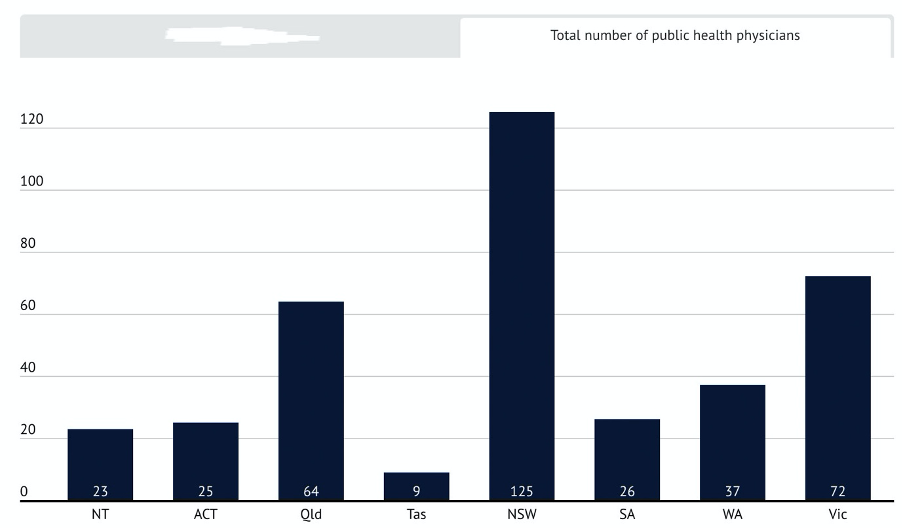 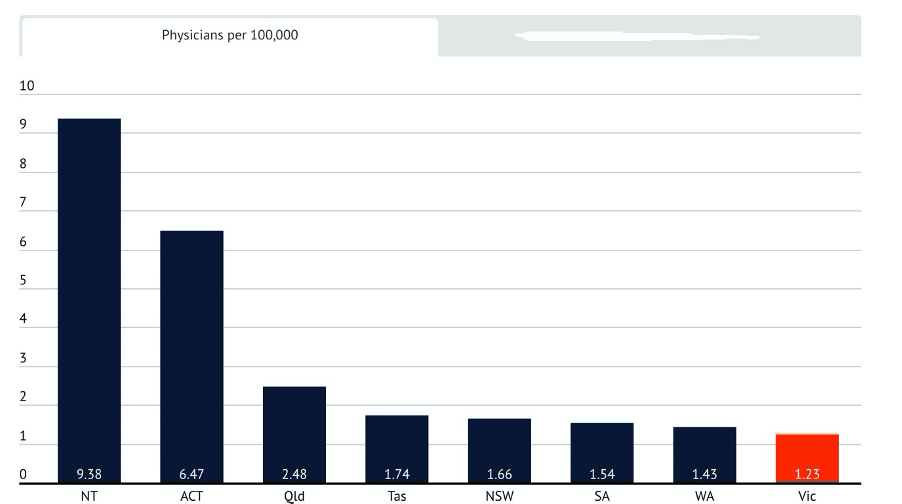 “Unfortunately the main outcome for successful public health is the absence of disease, and it has taken the pandemic to lay bare the true deficiencies in the Victoria system,” a DHHS source told The Age this week.

In hindsight, Victoria looks like a disaster waiting to happen – somewhat like this week’s highly distressing explosion of over 1000 tonnes of confiscated, and then largely ignored, ammonium nitrate on the docks of Beirut.

Some may find the comparison gratuitous, but both involve neglect of a problem whose magnitude should have been entirely obvious to someone in government.

It shouldn’t have taken the media to point it out to them.

This week the ABC’s Norman Swan, in HealthEd’s Going Viral podcast published on The Medical Republic, talked at length about the reluctance of state governments to embrace evidence around aerosols, masks, and the concept of going much harder much earlier, to attempt elimination rather than suppression.

During the session he said Victoria’s healthcare system was “not fit for purpose”.

He told TMR later that this was because it was centred on hospitals, not geographical populations as in most other states.

“Victoria also has an unwieldy number of hospital networks: 88 versus 15 in NSW, which are population-centred, 16 in QLD, four in WA, five in SA, one in TAS and ACT, two in NT,” Swan said.

“What that means is that there are few distributed public health resources on the ground unlike in other states, which can mobilise ‘foot soldiers’ who know their communities well. And it’s been poorly resourced historically, therefore has little infrastructure to build upon in a crisis.”

Even before the second wave took real hold in Victoria, Peter Van Onselen, professor of public policy at the University of WA and Griffith University, wrote in The Australian on June 24 that “Victoria’s failure comes down to its manifestly inadequate organisational health department structure and subsequent lack of skills on the ground to manage a second wave”.

Van Onselen said reopening the state after the first wave had exposed these organisational deficiencies, pointing to the fact that the state’s Chief Health Officer (and newly minted rock star) Dr Brett Sutton:

He went on to say that the “shortcomings in Victoria, which are long entrenched public policy failures, won’t even be admitted by its government”. Given Andrews’ recent deflection episode on hotels, security guards and quarantine, he appears to be right.

One of our foremost actual pandemic experts, Professor Brendan Crabb of the Burnett Institute, was quoted on the ABC a week ago saying “the critical importance of the community and community-informed research have been undersold in Australia’s response to the COVID-19 pandemic and need to be urgently prioritised”.

Professor Crabb emphasised that elimination was a realistic and important goal and that it was through a focus on community, and communities, that Australia stood to make significant progress towards eliminating COVID-19.

“How do you influence people to do what you want them to do? How do all the different and varied subsections of our community stay informed and stay motivated? I can tell you they’re not all influenced just by a national or state-based press conference,” he told the ABC’s afternoon briefing last Friday.

In Victoria right now naturally there is a focus on managing the on-the-ground situation, not the systemic issues.

Most staff have their heads down working hard on the immediate problems. They are learning and adapting at speed, which is to the state’s credit.

But if the second-wave situation is fobbed off as being mostly an unlucky series of incidents in quarantine hotels with some handsome security guards, rather than a fundamental structural and strategy issue for modern public health in Victoria, surely this state will be doomed to repeat history in some way in future.

Silver linings, as I’ve said before, are hard to find with COVID-19. It’s not pleasant to have your entire healthcare system put up in lights as being backward, for sure. Politically it’s hugely difficult to face up to. But it’s now a very clear and present issue.

Andrews and Co are learning fast and adapting, and even starting to employ the right kind of experts to help, such as Professor Crabb and some of his team at The Burnett Institute.

But COVID-19 has highlighted systemic and important structural shortfalls in Victoria. If Andrews and his peers don’t eventually address them, then one day they truly will be the ones blamed when the system fails again.

Just how many pandemic experts do we really have helping our governments?

What remains alarming about government outside of Victoria, and suggests we may not learn much in this crisis, is the dearth of true pandemic experts that all our governments have actually employed to help steer us through this crisis.

It’s not surprising that we don’t have that many of them and probably not that unusual that we’ve failed to seek out our best ones and get them on our government expert panels in the right position.

Pandemics tend to come and go in decadal time frames, so it would be possible to spend a career in this specialisation in Australia without seeing any true local action. As an island with a relatively well funded and run modern healthcare system (even Victoria makes the list in relative terms here), we aren’t likely to ever be ground zero in a big pandemic.

The irony for our current top pandemic experts is that they’ve struck career gold, but because they’ve hardly ever been top of mind in our health bureaucracies, when the real pandemic arrived on our shores the politicians and bureaucrats reverted to those they already knew and trusted. These were mostly career government doctor administrators, hospital infection specialists, and eventually even a past GP champion (Dr Michael Kidd).

So while Victoria will need a major longterm overhaul post-pandemic to catch up to the standard of most other state health systems, it’s not the only one with a blind spot in its government expert panels.

Last week I questioned the motives of a politician when they claim to “take all our advice from the medical experts”, pointing out that sure they do, but only after they’ve considered carefully their political context, in particular how voters will react if things stay too long in lockdown and jobs and the economy go to crap.

But it’s worse than this. Not only is political spin in play – all the consulted experts are by their nature on the government payroll and therefore in conflict – but most of the actual experts aren’t actual experts.

What the actual-actual experts are saying is politically very unpalatable:

Amid our worst pandemic in just over 100 years all our governments have continued to rely on career government bureaucrats and hospital-trained doctors for their highest level expert base (CMOs and deputy CMOs), although neither have any expertise in managing pandemics.

Yes, some actual experts are on committees advising these top-tier medical experts. But much is lost between that and the daily state health minister’s briefing.

It’s a blind spot still for most of our governments, highlighted by situations like that in Victoria, where it has taken a second wave for that state to listen to actual local pandemic experts.