With just over a month to go until a new shared debt recovery scheme, in which doctors found to owe a debt to Medicare for inappropriate claiming will have an opportunity to share that debt with their practice, it is apparent that there is much disquiet among owners.

Dr Rothenfluh attempted to water down concerns among owners by pointing out that the department has substantively changed their approach to audit so that most doctors who are falling outside norms on claiming are sent targeted letters and given assistance to change, before an audit is considered.

He said under this new approach, the amount of doctors who were actually audited was less than 0.5%.

The department had recognised that  its previous regime had become too disruptive with the net spread to wide for audits, but in this new system, those that were determined to owe a debt, were far fewer and the evidence, by the time a debt was determined, was always robust. 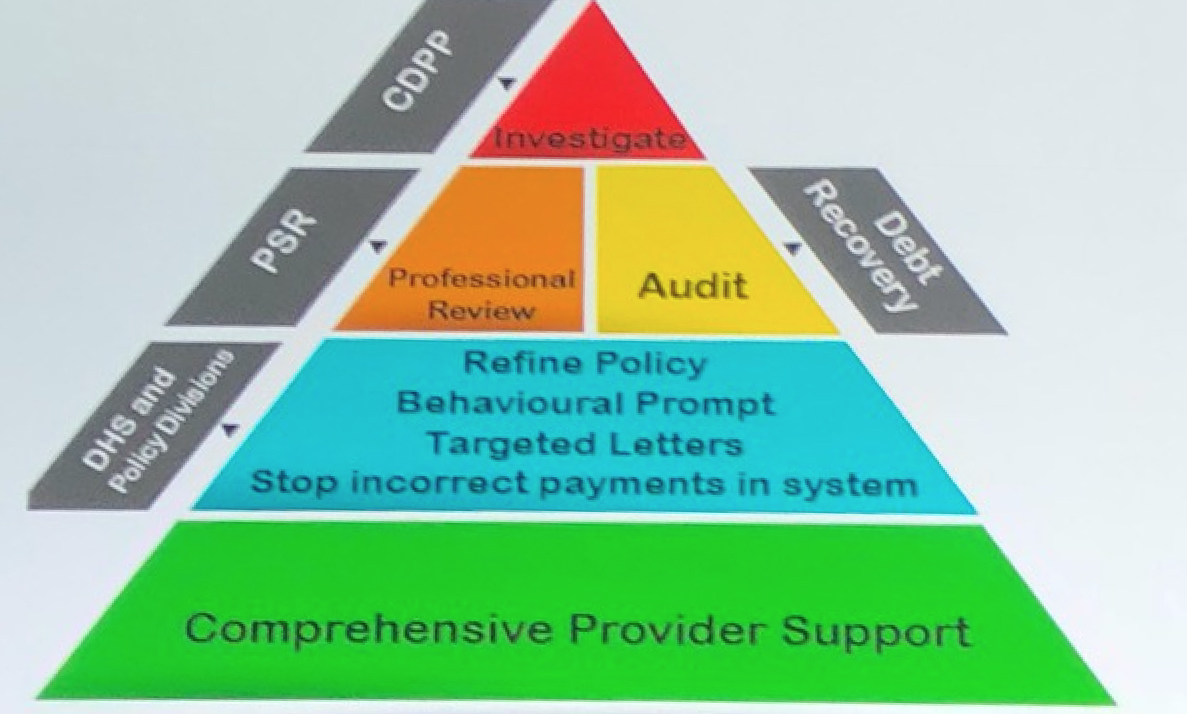 The blue part of the pyramid is where Medicare auditors have changed from considering audit, to sending targeted letters and working with providers to sort issues out before an audit level of scrutiny is required

Notably the 0.5% figure does not include audits initiated as a part of the PSR process. When questioned why PSR audits fell outside the opportunity for sharing debt, Dr Rothenfluh said his department had only been tasked with only looking at “inappropriate practice”. He pointed out that the PSR was a stand-alone agency looking at a different aspect of compliance.

Dr Rothenfluh told practice owners that shared debt scheme was introduced in response to very real cases where a practice or other persons in the claiming process were meaningfully involved, and that the scheme was aimed entirely at introducing a fairer approach to organisational billing practices and recognising that there has been an increase in the role of practices, corporate entities and hospitals in the billing of MBS services on behalf of their doctors.

He said the legislation enforced the view that both parties should take responsibility for ensuring claiming practices were appropriate.

The shift in the focus of audit practices and the reduction in the number of actual audits pointed out by Dr Rothenfluh did not seem to have much of a calming impact on the mostly practice owner/manager audience, howeeer.

Many pointed out to Dr Rothenfluh that regardless of the number of audits, the spectre of action and the likelihood that any claim made by a doctor would now almost certainly come back on a practice as well, would mean significantly more red tape for practice owners in order to protect themselves, and likely lead to some deterioration in the employer-employee relationship.