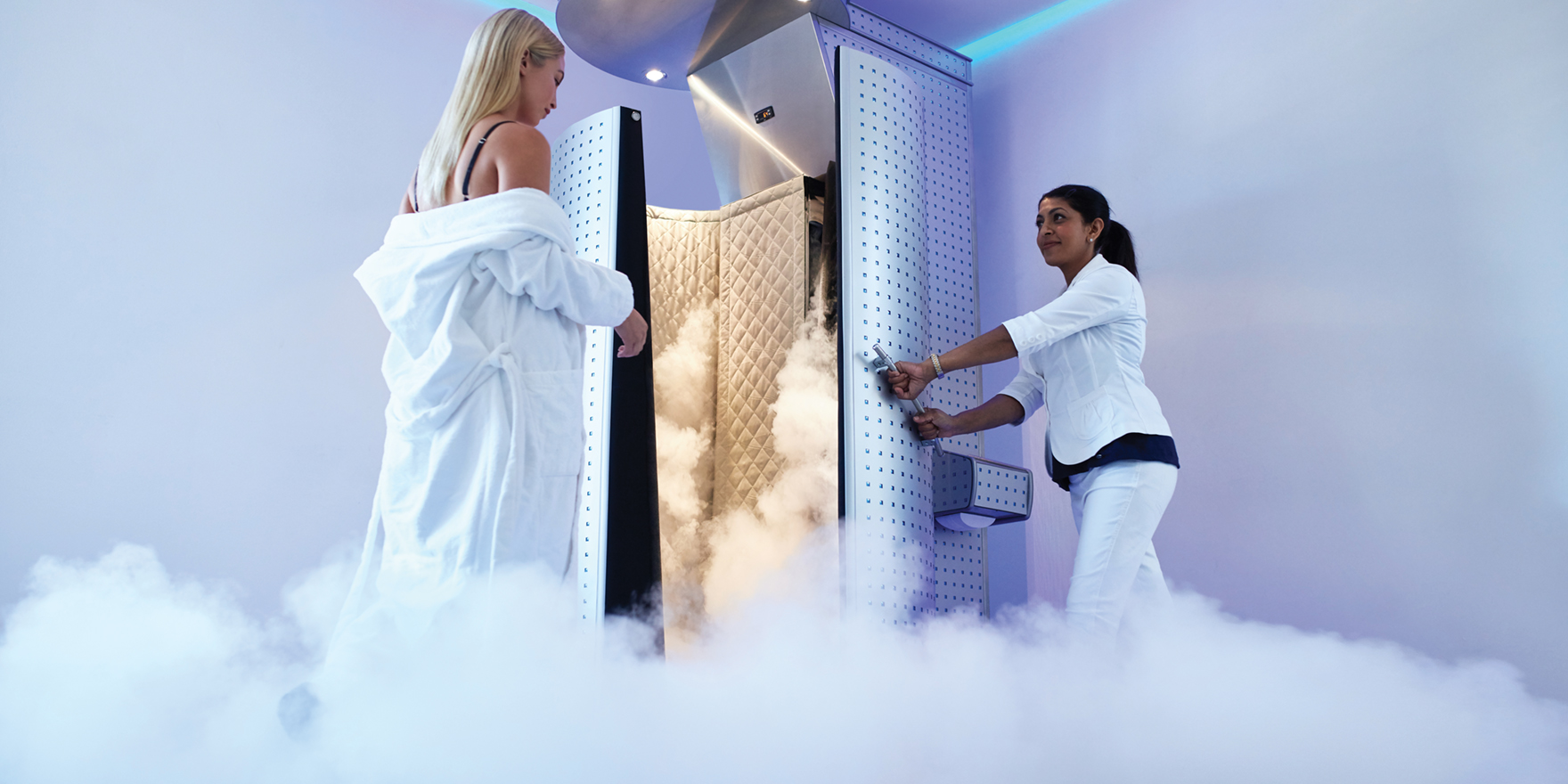 Ice is an age-old anaesthetic and anti-inflammatory agent that has probably always had a place in medicine. Who hasn’t thrown a packet of frozen peas on a sprained ankle, or had a wart frozen off?

But the medical magic of ice crystals has had a marketing do-over in recent years and the claims being made for cryotherapies can regularly defy belief.

So The Medical Republic decided to take a peek under the freezer lid to see whether these cryo-crazes have any evidence to back up those claims.

Liquid nitrogen mist chills the air to about the same temperature as the dark side of the moon.

You, the patient, remove your fluffy bathrobe and step inside a hyper-cooled chamber for about three minutes.

Your teeth might start to chatter as you’re exposed to temperatures of minus 110° to 170° Celsius.

And then it’s all over, and the clinic swipes $80 off your card.

This is whole-body cryotherapy, supposedly a treatment for many ills – including muscle soreness, jet lag, hangovers, depression, migraines, fibromyalgia and arthritis.

Some users say the extreme cold produces a feeling of euphoria and alertness.

Famous athletes and Hollywood performers swear by it, although at least two US sports stars suffered frostbite after they wore wet socks during cryotherapy.

The popularity of cryotherapy didn’t appear to be affected by the first fatal accident involving the treatment when in 2015 Chelsea Ake-Salvacion, a 24-year old employee of a Las Vegas cryotherapy salon, suffocated due to low oxygen levels in the cryotherapy chamber.

Whole-body cryotherapy was also linked to a case of transient global amnesia in a 63-year old person, according to a 2017 paper. “Even though the patient completely recovered, as expected, in 24?hours, this case highlights that whole body cryotherapy is potentially not as risk free as thought to be initially,” the authors said.

Cryo-clinics claim that the cold shock provokes a biological “danger” response – triggering blood oxygenation, an adrenaline rush and vasodilation. But the clinical evidence for these health benefits is almost entirely absent.

A 2015 Cochrane review found there was not enough evidence to support the use of whole body cryotherapy for preventing and treating muscle soreness after exercise.

And the FDA in the US has warned consumers that there is no evidence that cryotherapy helps treat any medical conditions at all.

In Australia, The TGA has not made an official statement on whole body cryotherapy devices.

A TGA spokesperson told The Medical Republic that these devices represented a medium to high risk and that sponsors needed to demonstrate they were safe and fit for their intended purpose before they could be registered on the ARTG.

Three devices for whole-body cryotherapy have already been listed on the ARTG.

No adverse event reports had been received by the TGA, the spokesperson said.

Associate Professor Ken Harvey, an evidence-based medicine advocate, made a complaint to the TGA about cryotherapy advertising two years ago.

At that time, Australian company Polarbare Club Cryotherapy was promoting its cryotherapy machine as being able to improve acne, psoriasis, eczema and autoimmune diseases.

It claimed whole-body cryotherapy sessions burned up to 800 calories per session, slowed down the ageing process and were “100% safe”.

These claims had no scientific evidence to back them up, Professor Harvey said.

“Typically, no outcome as yet for the above complaint!” he said in an email.

Cryolipolysis is a method for removing unwanted rolls of body fat by freezing them off.

It’s marketed as a safer alternative to liposuction as it doesn’t require scalpels or needles.

During the procedure, a machine sucks up a bulge of fat and exposes the tissue to freezing temperatures for about an hour.

The fat cells die at a faster rate than the rest of the tissue, and after a few months the body clears the debris away, reducing the amount of fat by around 10-25%.

The idea of freezing away fat might seem implausible, but it has actually been around for a long time.

The phenomenon was first observed in the 1970s when two US doctors reported that children who sucked on icy poles for too long developed cheek fat necrosis known as “popsicle panniculitis”.

Another rare case is equestrian panniculitis, where horseriding in tight pants in the cold causes tissue degradation.

Inspired by these observations, a team at Harvard Medical School invented cryolipolysis in 2007.

The resulting technology, called CoolSculpting, has now been used in more than five million procedures worldwide.

CoolSculpting procedures costs about $850 and clients don’t always come out looking the way they hoped. Surface irregularities and asymmetry can occur.

In some cases, people actually develop more fat in the area instead of less – a complication called paradoxical fat hyperplasia.

The manufacturer of CoolSculpting machines estimates that this complication occurs in only 0.025% of treatment cycles.

But data from one Florida clinic in the US showed the actual rates were 0.72%.

There have been two independent systematic reviews of cryolipolysis. Both were quite positive.

A review of 19 studies by the American Society of Plastic Surgeons found that cryolipolysis was a “promising procedure for nonsurgical fat reduction” that appeared to be safe in the short-term.

“We are currently still unaware of the long-term side-effects and outcomes of this treatment,” the authors said.

Another review of 16 studies, published in the Aesthetic Surgery Journal in 2015, found cryolipolysis reliably decreased fat deposits. “Reported complications are uncommon and appear to resolve without intervention,” the authors said.

But, of course, freezing fat cells is purely cosmetic and doesn’t reverse the harm of an unhealthy lifestyle or obesity.

If the ticking of your biological clock gets too loud, why not just stick the timepiece in the freezer? That’s the proposition by egg-freezing companies to women in their 30s who wish to delay pregnancy.

But what is rarely mentioned is that each frozen egg  has only a 6-12% chance of ever turning into a baby.

And women who are handing over around $7,000 for this procedure often have unrealistic expectations.

About 16% of women come to seriously regret the decision to freeze their eggs, according to a study by the University of California of around 200 women in their mid-30s.

Frozen eggs were first successfully used to achieve a pregnancy in Singapore in 1986.

It’s been considered a non-experimental procedure since 2012 in Australia.

Women about to undergo chemotherapy for cancer will often freeze their eggs or part of their ovary to preserve their fertility.

And companies such as Google and Apple have recently offered to fund egg freezing for female employees who want to focus on their careers instead of starting a family.

Egg freezing is an elaborate process. Women first have to self-inject hormones for a fortnight to stimulate oocyte maturation.

The eggs are then retrieved from the ovaries using an ultrasound-guided probe under light general anaesthetic.

Women produce around 10 mature eggs a month, so they need to repeat this process up to three times to get enough eggs for storage.

An estimated 9,000 Australian women froze their eggs for future use in 2016, according to UNSW data. This is 23% of the roughly 74,000 women who use assistive reproductive technology that year.

Experts recommend egg freezing before the age of 30 because of declining fertility. By age 35 only around half of a woman’s eggs will be capable of producing offspring. However, the average age of women seeking egg freezing is about 38.

Sperm freezing also has a long and fertile history, with the first successful human pregnancy as a result of this procedure being reported in 1953.

Nowadays, sperm banks are everywhere; around 400 babies were born as a result of sperm donation in Australia in 2016. The first generation, and in some cases second-generation, of donor-conceived children are now starting their own families.

CORD BLOOD ON THE ROCKS

The blood inside the umbilical cord when a baby is born is a reservoir of stem cells that can be used to treat a range of diseases.

Patients with leukaemia, lymphomas, aplastic anaemia, thalassaemia, immune deficiencies and metabolic storage diseases have all benefited from transplanted cord blood over the past 25 years.

In Australia, women can choose to freeze their baby’s cord blood after they give birth.

Once the baby is safely delivered and the umbilical cord is cut, hospital staff can extract the cord blood and freeze it in liquid nitrogen.

Cord blood can be donated to a public bank, where any patient in need can apply to use it, including the donor baby and any siblings.

It’s relatively easy to find a match, and around 90% of patients in Australia find a suitable cord blood donor.

But by choosing a public bank, the donor family loses the exclusive right to use the cord blood. Private companies, on the other hand, offer women complete control over frozen cord blood at a cost of around $4,000 over 25 years.

These businesses tend to make unscientific claims and overstate the benefits of cryopreservation, according to the AMA.

While they offer some protection against rare diseases, private services are hardly ever actually used.

Over the past decade, around 30,000 Australian families have chosen to freeze cord blood privately. But only six of these families actually needed to access thode stem cells.

So, that’s roughly a one in 5,000 chance of getting a return on investment. 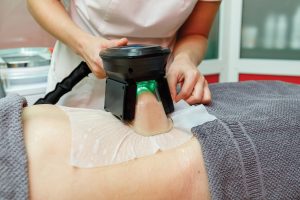 In cryolipolysis, a machine sucks up a bulge of fat and exposes the tissue to freezing temperatures for about an hour

HEAD IN AN ICEBOX

There are a growing number of liquid nitrogen freezers around the world storing the decapitated heads of human corpses.

It sounds grisly, but for believers in cryonics, this resting place is temporary. They hope that future advancements in medicine will allow their brains to be reanimated.

As the CEO of one cryonics business puts it: dead people are just “in need of a rescue“.

The first person to be cryopreserved was American psychology professor James Bedford, who died from kidney cancer in 1967. His body is still frozen.

Today, around 1,500 Americans are planning to have their heads or bodies frozen when they die and around 250 are already cryopreserved.

The appeal is mostly curiosity. “It’s really just because I want to see what happens,” one cryonics client said. “I’ll ask the cyborg next to me, ‘What happened, did we make it to Mars?'”

Most experts agree the freezing process invloved is so damaging there’s zero chance these frozen folks will ever be brought back to life.

Steps are taken to try to minimise the destruction of tissue, including emptying the body of blood and replacing it with vitrification solution – chemicals that prevents ice crystallisation when the body is cooled to 120°C below zero.

However, cryoprotectant chemicals are toxic to human tissue and vitrification causes fractures in the brain because the rates of cooling aren’t distributed evenly across the tissue.

Cryonics sells the dream that non-existent bioengineering or nanotechnology might be able to repair that damage some time in the distant future.

The first cryonic storage facility in Australia is being built in the NSW town of Holbrook.

The company launching the facility, Southern Cryonics, says the town has a hard-to-find combination of protection from natural disasters and the right zoning for a cemetery and mortuary.

And taking the concept of life after death one step further is a Russian company called KrioRus, which is also offering pet cryopreservation, for a cost of $US10,000 to $US25,000.

“In our cryostorage already await five dogs, five males cats and one female cat, and also three birds,” the company says on its website.