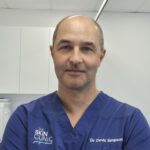 For many of us, the diagnosis of melanoma evokes memories of young patients in desperate situations with no obvious treatment and a fatalistic prognosis, at least before the recent advent of targeted drugs and immunotherapies.

As medical students, the only melanomas we saw in hospital were the metastatic deposits clustered in axillary node dissections and “open and shut” laparotomies, and it was easy to see the diagnosis inevitably leading to a prognosis that was universally dismal.

While all that has changed in recent years, there are still many patients who will succumb to the disease.

In Australia, and particularly in the more sun-drenched states of the north, we also see an increasing number of what might be described as “slow-growing melanomas”. These are subtle and easily lost in the sea of solar lentigines that seem to characterise our ageing beach-loving coastal communities. And while many oncologists may never come across one, these melanomas do have the potential to result in a lesion with metastatic potential.

He is said to have published more than 1,000 papers and didn’t confine himself to dermatology – one of his long-held beliefs was that leprosy was caused by eating rotten fish!1

He was a strong proponent of the theory that cancer had a local rather than constitutional origin and wrote of the “paramount necessity for very early treatment, if we wish to secure our patients against becoming constitutionally affected”.

The “melanotic freckle” that bears his name was described by him as an illustration of the “slide to malignancy”.

In his original description, he stated: “We first have freckles such as are seen on the eyelids of many elderly persons, these become very black and enlarge. Next the freckles coalesce and we have a patch which is infective at the edges and which may extend to the adjacent mucous membrane and even to the cornea of the eye. Lastly another stage is assumed and a growth takes place which is for the most part unpigmented and which in its tendency to break down and ulcerate, reveals its malignant nature.”2

Today, we would see this as a classic description of the transformation from in-situ disease to invasive and then the formation of an amelanotic nodule of more deeply invasive melanoma.

The concept of a benign lentigo that might transform into malignancy was the accepted dogma for many years and when Clark published his study showing how depth of invasion was a predictor of prognosis, he used the terminology “melanoma associated with lentigo maligna”.3

In 1997, the great American dermatopathologist Bernie Ackerman decided to put an end to the pre-malignant status, calling this “fuzzy thinking”. In his opinion, lentigo maligna was a patch of malignant melanocytes and should be termed and treated as melanoma in situ.4

Another more recently recognised variant is the lentiginous melanoma, which is similar to lentigo maligna but lacks the loss of rete ridges and occurs in middle-aged-and-older individuals on the upper arms and upper torso and after a protracted period might result in dermal invasion.5

A rare but well recognised risk is also the association between desmoplastic melanoma and lentigo maligna, and induration underlying any lentiginous lesion should be thoroughly investigated.

The problem we as clinicians are faced with is that melanoma in situ, lentigo maligna type and variants such as lentiginous melanoma, are very slow growing and can be extremely difficult to distinguish from benign solar lentigines.

In order to detect the subtle features of lentigo maligna, one needs to use a combination of advanced dermatoscopic skill and experience with a high degree of suspicion.

Sometimes the main clue to malignancy can be an unexpectedly large lentigo-like lesion or a recent change in colour, usually becoming more heavily pigmented or developing grey features.

Despite the slow growth, the risk of invasive disease remains and early detection is desirable.

In a study of “slow-growing melanomas”, the authors found that 75% of these lesions stayed the same size or enlarged minimally over the period of observation – at least one year – but changes were seen in the colours and disorganised dermatoscopic patterns.6

In our heavily sun-damaged Australian population, quite often these lesions may have passed unnoticed in a sea of similar freckles before areas of dark brown, grey or black start to appear. By then the lesion can be of quite a considerable size and since they occur in heavily sun-exposed sites, definitive treatment can be a toss-up between curative therapy with severe cosmetic defects or a less aggressive approach taking into account the likelihood of invasive disease occurring and the patient’s co-morbidities and age.

Outside of hospital practice the vast majority of melanomas are detected at the in-situ phase and the incidence of melanoma in situ has increased by 115% between 2004 and 2015 in Australia.

While this is likely to be partly due to overdiagnosis, the fact remains that detection of early melanoma results in reduced mortality by detecting lesions with a lesser Breslow thickness and the ability to recognise melanoma at its earliest stages in desirable even if we are unsure of the economic implications of diagnosis at the in-situ stage.7

Melanoma rates are starting to decrease in younger Australians; however, the rates in the older population continue to increase and with the combination of increased longevity and increased leisure time, we are likely to see a large number of subtle lentigo-like melanomas.

The challenge will be to concentrate time and resources on those that are most likely to develop into invasive disease.

Dr David Simpson is a primary care skin cancer physician on the Sunshine Coast, Queensland. He graduated from Charing Cross and Westminster Medical, University of London and subsequently emigrated to Australia where he has developed a special interest in skin cancer. He is a senior lecturer and teaching assistant for the University of Queensland Master of Medicine program and examiner for the Skin Cancer College of Australasia.