Breast density: What’s all the fuss about? 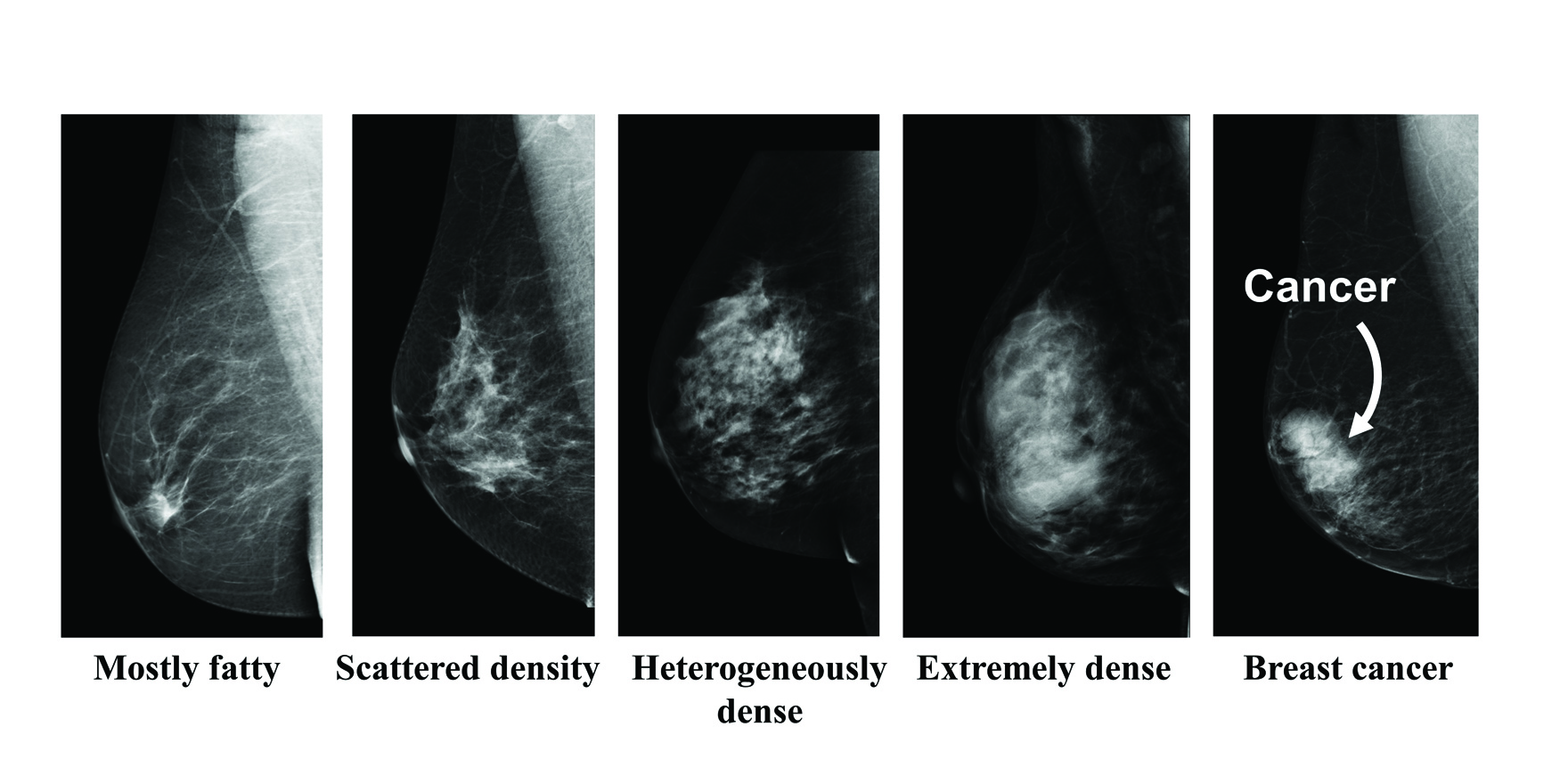 Notification and management of breast density is a complex issue. Here’s what we know so far

There has been a lot of talk in the media lately about breast density in relation to breast cancer screening and the risk of breast cancer. While it may seem like a new hot topic, there has actually been steady research on this since the 1970s.

Breast density, also known as mammographic density, refers to white and bright regions on a mammogram. The whiter the mammogram, the more dense the tissue is.

The American College of Radiology describes four categories of density in the BI-RADS Atlas ranging from “Mostly fatty” to “Extremely dense”.1  (See above)

Eight per cent of women aged between 40 to 74 years have “Extremely dense” breasts, while 35% have “Heterogeneously dense” breasts.2  These two density categories are often combined and termed “dense breasts”.

Breast density is established during puberty as the breasts develop.

A number of environmental and genetic factors are involved in determining a woman’s breast density. Breast density tends to decline gradually with age, and this decline can be particularly apparent during menopause.

WHY DOES IT MATTER?

Density on a mammogram was first described by John Wolfe, who reported back in 1976 that there appeared to be particular parenchymal patterns seen on mammogram that were associated with a high chance of the woman developing breast cancer in the future.3 However, in the following year, Egan and Mosteller claimed that the finding reported by Wolfe was an artefact of masking – the breast cancer had already been there, just hidden among these parenchymal patterns.4

After 40 years of research and debate, it is now widely accepted that breast density is indeed an independent risk factor for breast cancer, as well as having this masking effect.

The masking effect of density poses challenges for breast cancer detection by digital two-dimensional mammography, such as that employed by BreastScreen Australia services.  Breast cancers show up white on mammogram, as does the dense tissue. (See above)

Detecting a breast cancer in dense breast tissue is sometimes described as “finding a snowball in a snowstorm”.

Due to this masking effect, there are women who have had breast cancers missed in routine screening due to their breast density. This is not a new problem, this has been well-known since the inception of the screening program.

An often-cited statistic for the risk of developing breast cancer is that women with extremely dense breasts have a four to six times increased risk compared with women with breasts classified as “Mostly fatty”, when matched for age and BMI.6

However, it should be noted that this statistic compares the two extremes of density, both of which are relatively rare. Most women are in the middle of these extremes. If average density, or “Scattered density” is set as the baseline for comparison, then women with “Extremely dense” breasts have about a two-fold elevated risk.

For women with “Heterogeneously dense” breasts this is less, about a 40% increased risk.7

Combined, these two distinct issues associated with breast density, in both masking cancer and as a risk factor for breast cancer, result in women with breasts classified as “Extremely dense” having a five times greater chance of having an interval cancer than women with breasts in the “Scattered density” category.5

Interval cancers, defined as those diagnosed within two years of a negative screening mammogram, can be larger and more progressed than screening-detected cancers at the time of diagnosis.

WILL WOMEN BE NOTIFIED IF THEY HAVE DENSE BREASTS?

The current position of BreastScreen Australia and the Royal Australian and New Zealand College of Radiologists is to not notify women of their breast density. 8, 9 This is due to a number of reasons, largely related to uncertainties around measurement and clinical management of women with dense breasts.

The BI-RADS scale is very subjective, and the assessment of density can vary among radiologists. Therefore, up to 19% of all women screened could potentially be advised differently (dense or non-dense) at the next screen.10 There is also uncertainty in what clinical pathway is appropriate for women with dense breasts.

There are no randomised controlled trials evaluating the use of supplemental screening with whole breast ultrasound in women with dense breasts that have been run for a sufficient length of time to show a survival benefit.

Supplementary breast ultrasound in women with dense breasts increases cancer detection by 50% but at the cost of a very high false positive rate as proven by biopsy.

Without studies demonstrating a survival benefit, the concern is that some of the cancers detected by other screening modalities could result in diagnosis of cancers that are slow-growing and would never have threatened the patient’s life.

Although breast density is not recorded or reported by BreastScreen Australia, if a woman wishes to know her density she can find out. Through referral to a private radiology provider, a mammogram with density measurement can be requested at the patient’s expense.

Women can also request a copy of their mammogram from BreastScreen and take it to a private radiologist for density assessment. Some private clinics offer quantitative measures of density, such as Volpara and Quantra, which improve the reproducibility of the measurement over the subjective BI-RADS assessment. 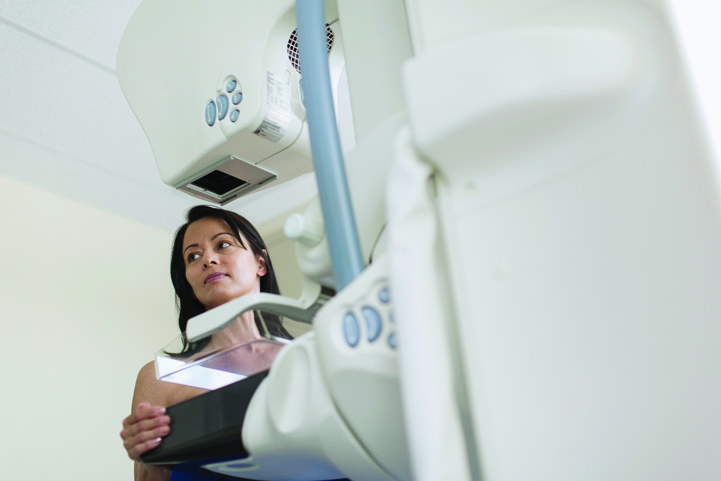 A mammogram with density measurement can be requested privately, at the patient’s expense

WHAT ABOUT IN WESTERN AUSTRALIA?

Currently, BreastScreen Western Australia is the only Australian state screening program to notify women if they have dense breasts, and have been doing so for over 10 years.

The information communicated to women with dense breasts is largely focussed on reassuring the woman that dense breasts are normal and common, explaining the lowered sensitivity of the mammogram to detect cancer, and directing women to their GP for a breast check.11

The information provided to GPs in Western Australia advises that dense breasts are associated with increased risk of breast cancer and reduced mammography screening sensitivity. 12

The factsheet states that “Supplemental screening of women with dense breasts who are average or low risk is not currently recommended by any international evidence based studies.”

The factsheet also states, “However, the American College of Radiologists/Society of Breast Imaging appropriateness criteria state that women at intermediate risk of breast cancer due to a family history, a personal history of breast cancer, or other risk factors including premalignant lesions such as lobular neoplasia may benefit from regular supplemental whole breast ultrasound.”

The Commonwealth Health Department has commissioned a New Zealand-based company, Allen and Clarke, to conduct a literature review of the evidence around breast density, initiated in August 2017. Depending on what is uncovered, it is possible this review could form the basis of a revised BreastScreen Australia position statement.

The review is due to be published before the end of 2018.

There is growing pressure from patient advocates for a change in policy.

Much of the breast-density media coverage over the past year has featured patients who have had a breast cancer missed, with compelling stories that need to be heard.

A survey of women’s experiences and chosen management pathways following dense-breast notification in Western Australia has been conducted by WA-based researchers, and publication of the results is eagerly awaited.

Notification and management of breast density is a complex issue, and the national conversation is likely to continue over the coming years.

Wendy Ingman is The Hospital Research Foundation Associate Professor of Breast Cancer Research at the University of Adelaide, based at The Queen Elizabeth Hospital, Adelaide, South Australia

Wendy Ingman’s research is funded by The Hospital Research Foundation, the National Breast Cancer Foundation and Australian Breast Cancer Research. She is a member of the InforMD alliance of breast cancer researchers (www.informd.org.au) fostering a well-informed shared conversation about breast density. She is also part of a Clinical Oncology Society of Australia working group developing information about breast density for health professionals, and a member of the Pink Hope Expert Advisory Committee. Wendy does not receive any funding, or consult for, any private company with an interest in mammography or breast density.