Attack of the phages

Professor Graham Hatfull had spent more than a decade building a library of viruses when he was called by an old colleague seeking one very specific predator.

The London-based microbiologist, Dr James Soothill, needed a virus that would prey on a bacteria that was killing one of his patients.

The patient was a 15-year-old girl with cystic fibrosis who had just received a double lung transplant. Isabelle Carnell-Holdaway had been taking antibiotics for eight years to treat a chronic Mycobacterium infection, and while the surgery itself went well, the bacteria quickly exploited her immunosuppressed state.

Within weeks, the bacterial infection had spread from her surgical wound to her liver, and then throughout her body, causing skin lesions on her arms, legs and buttocks. Seven months after the operation to save her life, Isabelle was allowed to leave the hospital – for palliative care.

As she reached the end of the road with conventional medicines, Isabelle’s mother asked the doctors about a promising, but largely unproven, treatment called phage therapy.

Bacteriophages, Latin for “bacteria eating”, are naturally occurring predators that survive by attacking and killing bacteria. There are an estimated million trillion trillion of these viruses living in the ground, water and in us, and by the time University of Pittsburgh’s Professor Hatfull got that fateful call in late 2017, he had collected 15,000 of them.

The molecular geneticist had deployed students around the US to find samples in their environment, as part of the SEA-PHAGES program, to sequence and annotate their genomes.

Back then, Professor Hatfull dismissed the idea of using phages medicinally as “nutty”.

Phage treatment has long been dismissed in the West as a fringe idea, but these mini-predators have been used to treat bacterial infections for a century. The discovery of penicillin and the ease of manufacturing and distributing antibiotics quickly allowed antibiotics to become the dominant way to treat bacterial infections. Nevertheless, phages continued to be offered in some former Soviet Union and European countries.

Clinical Send in the phages

Recent high-profile cases of miraculous recoveries with phage therapy suddenly drove enormous interest into these microbes, and Professor Hatfull just happened to have the world’s largest collection of phages.

“It’s a very peculiar sensation to go from just being involved in the tubes and the petri dishes to actually having patients whose lives depend on you being able to do something potentially helpful,” says Professor Hatfull.

Nevertheless, finding the right phage to treat Isabelle wasn’t as simple as searching for a book in the library catalogue. It took Professor Hatfull and his team three months to identify a phage that would kill her strain of Mycobacterium abscessus.

This phage, named Muddy, effectively killed the M. abscessus in the lab.

Another two, named BPs and ZoeK, also seemed like a close match. The only problem was that they weren’t killing the bacteria aggressively enough.

When phages attack bacteria, they attach to the outside of the bacteria’s membrane and inject their genetic material into the cell, taking over its replication machinery. The cell can create hundreds of these little viral copies before it tears the cell walls apart, ejecting the babies into the surrounding environment. However, “temperate” phages, such as BPs and ZoeK, are happy to ride along with the bacteria for a while without causing this final violent stage. As a result, they are far less useful as a tool to fight bacterial infection.

To overcome this, Professor Hatfull and his colleagues had to precisely genetically engineer the phages, removing the gene that stopped the phages from delivering the death blow to the bacteria. This was technically gene editing, but because no new genetic material was introduced, it didn’t fall under GMO regulations in the UK, allowing for a much smoother path to human treatment.

About six months later, in June 2018, the phages were ready for Isabelle. Doctors gave her a test topical swab of the little predators, and when the results looked fine they began the first intravenous injection of this three-phage cocktail.

Within two days, she began sweating and flushing, but had no fever. Within three days, her sores were drying and healing. She would continue to have two injections, every day, for more than six months. Her wound and skin lesions continued to heal, as did her liver and lung function. She suffered no major side-effects.

Her story, published in Nature Medicine, was a watershed case. It was the first study to treat a patient with genetically modified phages and it was the first to successfully treat mycobacterial infection in humans.

This is important, because this group of bacteria, known as nontuberculous Mycobacteria, is a common source of infection for people with lung disorders such as cystic fibrosis. But the genetic closeness to the bacteria that causes tuberculosis also raises hopes that phage therapy may one day be an option for treating this infectious disease, responsible for more than a million deaths each year. 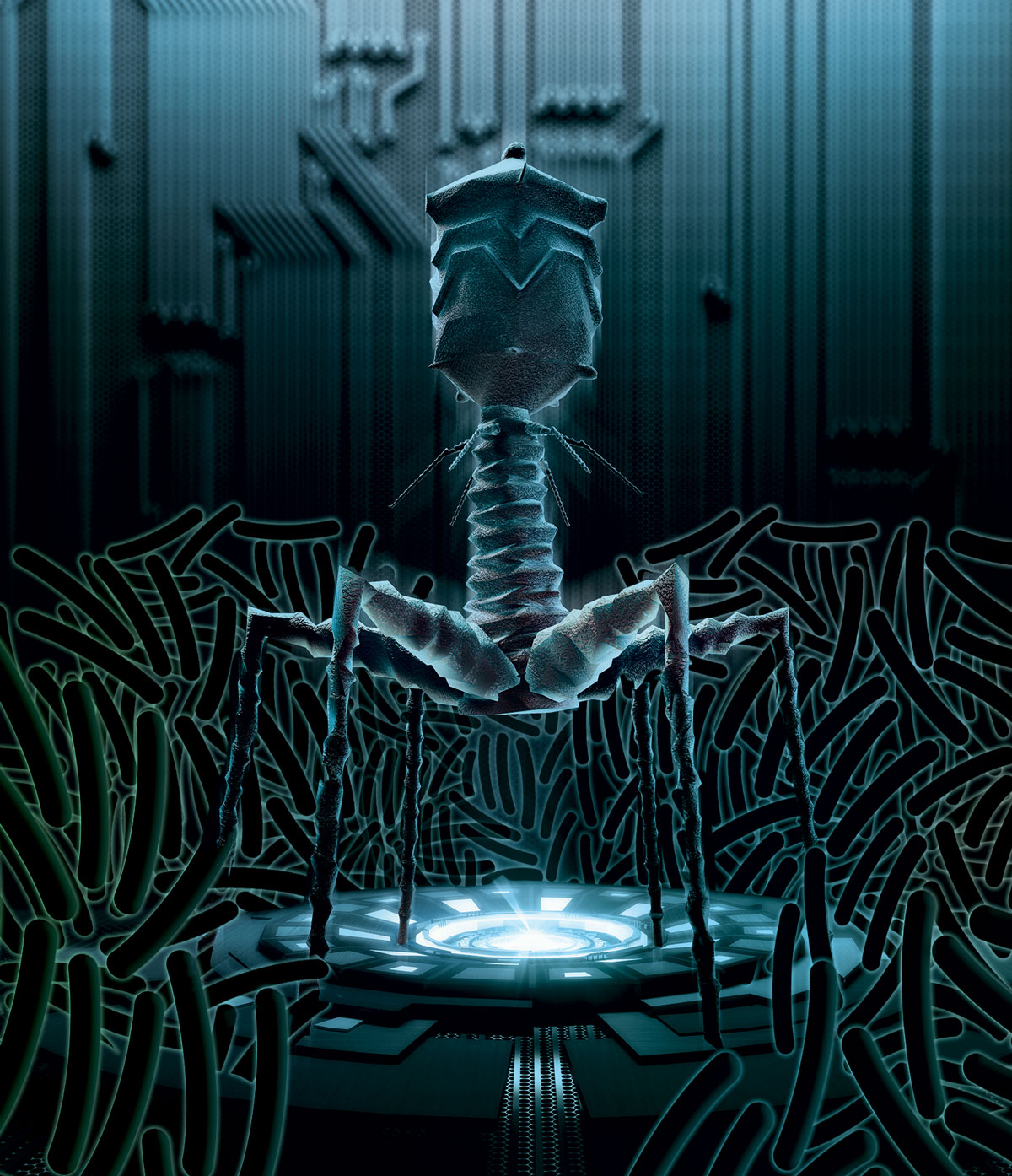 Nevertheless, one of the biggest advantages of phage therapy is also its weakness. Phages often only target one strain of bacteria, leaving others alone. This means they don’t have the off-target, wide-reaching impact that antibiotics do. It also means clinicians have to find the exact right phage for treatment to be useful.

So far, clinicians have had the most success treating patients with carefully tailored phage cocktails that have been designed for their specific bacterial infection, but more widespread uptake of phage therapy would rely on scientists formulating cocktails of phages that pharmacists could grab off the shelf to treat the most common infections.

One reason Professor Hatfull is optimistic is that TB strains tend to be more closely related to each other than other infections such as M. abscessus and Pseudomonas. “Therefore, you’re more likely to have success with a small number of phages to treat multiple different types of strains,” he says.

The challenge will be running high quality clinical trials for TB, because compassionate access programs currently require participants to have tried all available alternatives, to be compliant and to not yet be sick enough that there is no prospect of getting better, he says.

Getting funding for phage therapy trials has been another challenge, as has the COVID-19 pandemic.

Professor Jon Iredell, infectious diseases physician at Westmead Hospital in Sydney, and colleagues, are currently treating children with cystic fibrosis through compassionate access pathways. They have had positive outcomes so far, but Professor Iredell was aiming to run a clinical trial on phage therapy later this year to develop more rigorous clinical data, before the coronavirus came onto the scene.

For this to become a conventional therapy, researchers need to better understand the pharmacokinetics and pharmacodynamics of the phages. They need to understand how quickly phages reach their target, how that differs by route of administration and how the human immune system clears the phages. Groups such as the team as Westmead Hospital have opted more for intravenous administration, but others prefer nebulising the phages.

One of the most promising aspects of phage therapy is its apparent safety.

Up until this point, clinicians have often opted to overdose patients, with the belief that underdosing may not get enough of the viruses to where they need to go, and that they are unlikely to do harm.

“We haven’t really been able to detect the toxicity signal from phages,” says Professor Iredell. The core safety concern with phages is that they are grown in bacteria, and some of the bacterial contamination – such as bacterial cell walls – need to be cleaned up because it can be inflammatory, he says.

“You can imagine that if you bust up a whole lot of bacteria, and you inhale it all or you inject it all, then you might get a bit of a febrile response to that. So this is why you need good quality preparations.”

While these large clinical trials are vital for doctors to trust the treatment and public health officials to determine how it is funded, Professor Iredell believes there is enough evidence now to treat phages seriously.

And for Tasmanian-based documentary-maker Walter van Praag, the wait for these studies is too long.

“I’m always going in for tune-ups,” says Mr van Praag, an adult in his 50s who has cystic fibrosis. “When your lungs are doing bad, you go to hospital and they put you on antibiotics for a few weeks or maybe a month so you feel a bit better. And then it goes bad again.”

But ongoing antibiotic use eventually led to van Praag’s tinnitus and then hearing loss. He knows that phages won’t cure his cystic fibrosis, but he is desperate for an alternative to intensive antibiotic treatment.

In frustration, he travelled to Europe and former Soviet Union countries earlier this year in search of phage therapy. When he arrived in Europe he was coughing blood, but says that within 24 hours of using over-the-counter phages bought in the Ukraine, it stopped.

“My bleeding and my lung exacerbations stopped immediately,” says Mr van Praag, even though the phages were not specific to his genotype of Pseudomonas Aeruginosa. This, he attributes to eradicating other bacteria in his lungs, giving his immune system a helping hand in fighting off his infection.

Upon his return to Australia, his CF team found his lung function was at 40%. “I haven’t recorded a higher lung function for years,” he says.

Phages are increasingly a beacon of hope in facing the threat of antibiotic resistance too. Each year, around 70,000 people die from antibiotic resistant infections, with the number set to rise to 10 million by 2050, according to the World Health Organisation.

Meanwhile, pharmaceutical companies are producing fewer and fewer antibiotics. This is because scientists have to search further and further afield to find microbes that make promising antibiotics, which is expensive, and most antibiotics are only used for short stints, which is far less lucrative than a daily heart drug.

Because antimicrobial resistance is ratcheting up, agencies such as the WHO tell pharmaceutical companies to keep these new drugs in reserve, to keep them working for longer.

But funding is also a challenge for the phage industry. The generic phage therapies offered elsewhere are not patentable for pharmaceutical companies. So the London case proved that phage therapies could be genetically engineered, raising the hopes that biotech companies would find such investment more attractive.

In the meantime, personalising phage cocktails for each individual patient is an incredibly time- and resource-intensive approach and thus an expensive one. In Georgia, patients can get phage therapy for a few thousand dollars, but prices quickly jump up elsewhere, such as in the US.

“We think that we can provide a comprehensive Australia-wide program of phage therapy, distributed in every major centre and distributed from every major centre, with very high quality monitoring and provision,” says Professor Iredell. “And we think we can do this inside a network of industry collaborators, probably over five years, for about $50 million.”

This should enable clinicians at each centre to treat several patients each week, he says.

Professor Iredell is seeking clinical partners, and welcomes doctors contacting him if they have a patient who may be a candidate for phage therapy.

Extensive phage libraries and networked clinics may be key for phages to move beyond miraculous-sounding case studies and reach people in time.

At the same time Isabelle’s team was seeking phages for her infection, there was another teen with cystic fibrosis also in need of phage treatment. It took Professor Hatfull and his team several months to finally find a phage that could destroy the bacteria in her lungs.

But before they were able to send it to her team, the girl had passed away.