Are booking engines having an existential moment? 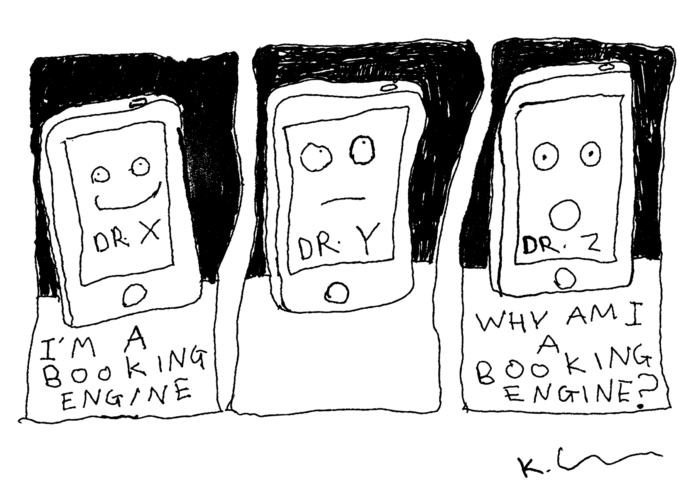 After years of rapid growth in customer base and functionality our major booking engines are struggling to find their identity.

After years of rapid growth in customer base and functionality our major booking engines are struggling to find their identity.

Although there are obvious links between a booking engine group and a telehealth video software vendor in that a booking engine can add the telehealth functionality to their clients offering, the objective could be just as easily achieved through an integration with a vendor. In fact, by going the integration path with a range of vendors, you can offer your clients a more flexible range of options in video telehealth.

If you read deeper into the ASX announcement of this deal you quickly realise that it’s not actually 1st Group acquiring Visionflex. It’s the major shareholders of Visionflex getting into the booking engine business.

When the deal is completed, Visionflex’s major shareholders will control 57% of the company and although initially the board will be 3:2 in favour of the old guard, the new guard is well and truly in control.

What does the new guard have in mind?

It could be any one of a number of things, or a combination thereof.

For one thing, Visionflex the company, which is still small, still loss making and probably in need of capital, just got access to the public market to raise capital, potentially. If Visionflex controls 1st Group now we are technically looking at a backdoor listing of the former.

But that can’t be the main reason.

The key player behind the deal (and now major shareholder) is Brook Adcock, founder of Adcock Private Equity. Adcock’s main claim to fame is founding the Pandora Jewellery franchises in Australia with his then wife Karin Adcock, and selling it all for $100m in 2009. Any Adcock CV should include his 10 year stint as an RAAF pilot, and then a Qantas pilot, to give  you a sense that he’s not probably your average PE guy.

Adcock PE has an interesting array of technology investments suggesting that Adcock himself might know what he doing. He might have some ideas for the struggling 1st Group – it made a loss of more than $3m last year –  born of his experience with his other investments, many of which, although in different markets, run interesting parallel customer engagement cloud based technologies.

That might mean that 1st Group founder, and long time off and on CEO, Klaus Bartoch will be in for some interesting board meetings.

I wonder (out loud) what they will be talking about.

I bet the movers and shakers at HealthEngine and Hotdoc would be wondering too.

Compared to these two market leaders 1st Group is somewhat of a troubled child, but it is still third overall in the market, has built and acquired some interesting assets, and occupies ground in allied health and speciality markets that both the market leaders would probably love to have as part of their portfolios.

Reading that either HealthEngine or Hotdoc had acquired 1st Group would have made a lot more sense on paper. Both have hoovered up all the GP practices that are out there and willing to engage with a booking engine, developed similar, and innovative patient engagement functionality, and with that, seemed to be a bit lost as to how to grow now.

HealthEngine’s failure to get its IPO off the ground, and its recent acquisition of HealthSite contribute to this feeling.

On the one hand, apparently it couldn’t convince potential investors that it had a good enough growth story to get its IPO rolling (although there’s a myriad of other reasons an IPO will stall), and on the other, it bought a small and struggling practice marketing group that didn’t seem to offer them much other than maybe a few hundred practices they didn’t already have.

It’s like they were lost for things to do after the IPO ran aground.

Hotdoc’s story is slightly different. It is possibly the number one booking engine in general practice now (there is overlap between the groups as some practices use both), but it looks like it has gone as far as it can go in this market without introducing something new and  ground breaking in functionality that would turn up the revenue of their existing client base.

Hotdoc is backed by a very experienced and clever venture capital group which I suspect is reluctant to have its entirely organic play so far, start doing acquisitions.

There can be good reasons for not going down the acquisition path as a growth strategy. Doing acquisitions is often an admission your organic growth model is out of runway. Acquisitions are also very distracting and almost always a lot messier than they appear.

So where do the major booking engine’s go from here?

According to 1st Group’s CEO, Klaus Bartoch, there are upwards of 50m bookings made with healthcare providers each week by consumers, but so far, only 10% of that market has been captured by the online booking merchants in the form of online bookings.

Is that upside waiting to happen?

Maybe, but what if that’s about where consumers see the utility of online bookings for now?

This issue must be occupying the thoughts of the senior management of each booking engine (and their backers).

If you want to get an idea of just where booking engines sit on the app fondness scale of your average punter patient, ask any booking engine app user to rate how much they use and value their booking app, versus their banking app. It’s not a very fair comparison, but it does provide perspective.

How do booking engines go next level and insert themselves into the lives of patients at the sort of everyday usefulness level that a banking app has?

An interesting dichotomy exists in the healthcare market between the booking engines and the patient management systems (PMSs).

The booking engines are far more focussed on the patient experience and patient engagement while the patient management systems have a significant doctor focus (an historical thing), with an obvious eye on the patient in the equation moving forward.

From a business model perspective nearly all the money exists today in the PMS market. The combined revenues of Best Practice and Medical Director is something like eight times the combined  revenues of HealthEngine and Hotdoc. And really, you should throw Genie into the equation on the PMS side and that makes the market differential even more stark.

The reason is that PMSs capture far more overall transactions in data terms which relate to how healthcare is funded in this country. A doctor gets paid on a fee for service – transactional – basis mostly by the government, and the PMSs are over all the transactions and that data funded by government.

Booking engines are born of the idea that one day our healthcare system will be patient centric, and the important decision making, and funding, around healthcare transactions will migrate to the patient.

If that happens one day then the booking engines, with their singular focus on making the patient’s lives much easier in their healthcare journey would end up in a much better position.

But where in the world is a healthcare system really patient centric?

Nowhere, not even in the highly advanced, and much more patient centric systems you observe in Scandinavian countries.

At the end of the day governments simply could not afford to hand the sort of power over to consumers in healthcare that you see them have in other markets such as banking and travel. It would send them bankrupt.

There will undoubtably be much more consumer choice and power as data sharing and interoperability technology gets better but there will always need to be a trade-off between cost, efficiency and consumer power in healthcare while government is footing 90% of the bill.

Is this the ugly rub for the entrepreneurs backing the booking engine businesses?

If you accept this logic, the booking engines will need to change tack somewhat now they’ve maxed out on their patient engagement functionality and look upstream, to where the data being transacted has a more direct correlation to healthcare funding.

The obvious (but not only) candidate as things stand today is the PMS market.

The PMSs are gatekeepers of the sort of transactions and data which is central to our healthcare funding system, and the gatekeepers of access to GPs at a time when our whole healthcare system needs to pivot to more sophisticated and connected community healthcare management via the general practice network.

Interestingly, the major PMSs, in their current incarnations, are mostly technologies stranded in very traditional and disconnected healthcare business models and silos. The future is going to connect care at the intersection of aged care, hospitals, general practice, specialists and allied care, but these PMSs only sit in and talk to general practice, or, specialists.

If you are a smart, capable technology company that has built a great booking engine, you would not want to reproduce what PMSs do today.

What would you create if you had the money, the will , the talent and the experience, as feasibly HotDoc and HealthEngine have and perhaps with its new PE owner, even 1st Available might develop?

That’s the board meeting I want to sit in on.