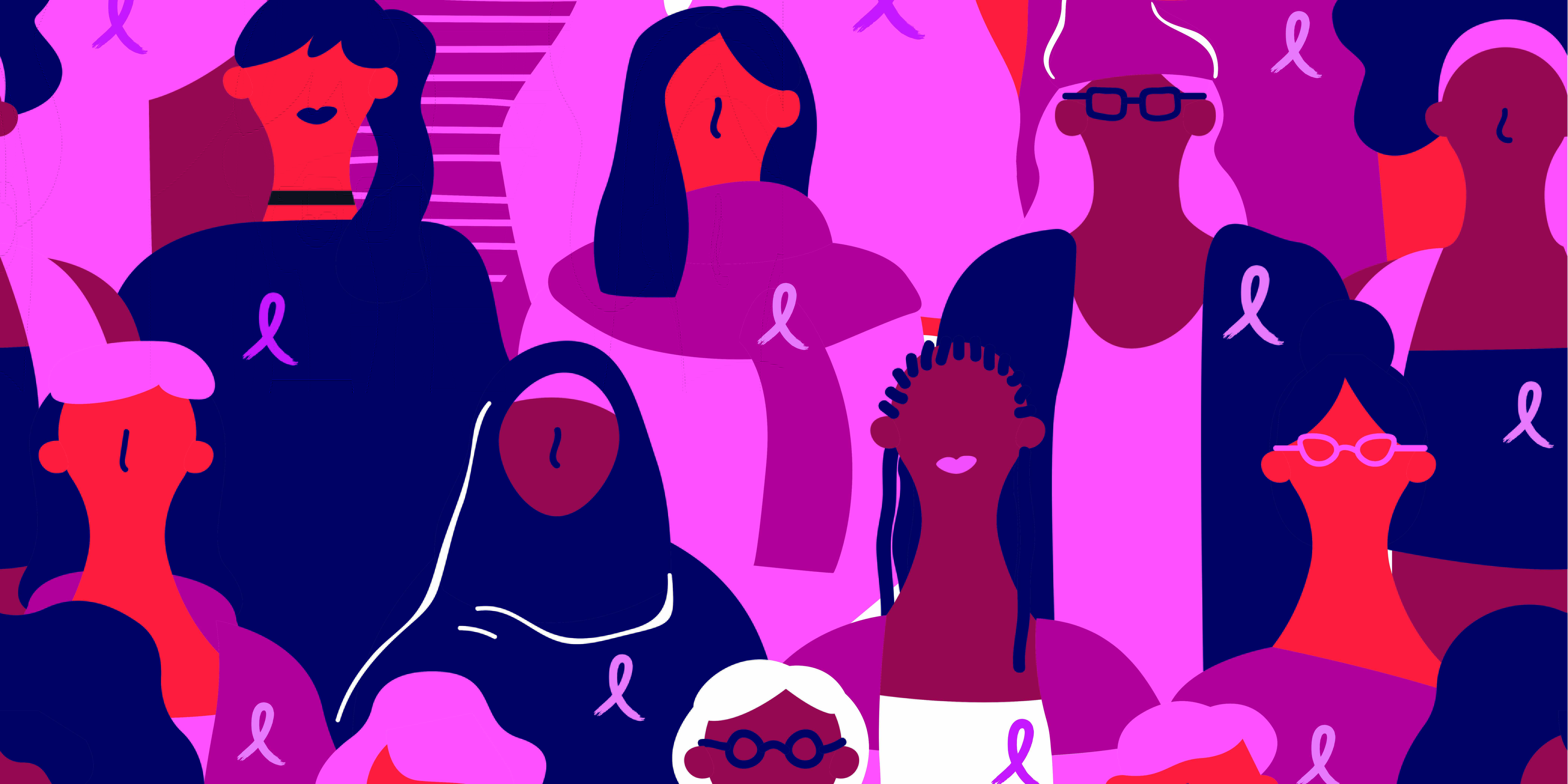 Breast cancer remains one of the leading causes of death of women in Australia.1 This is despite the presence of an active national breast cancer screening program.

The limitations of screening mammography are well established and include reduced sensitivity in dense breasts, overdiagnosis of prognostically insignificant cancers and underdiagnosis of potentially lethal disease.2,3,4,5 There is a substantial clinical need for improved methods of breast cancer detection.

Breast Magnetic Resonance Imaging (MRI) provides the highest sensitivity of any imaging modality for breast cancer detection.6,7 Conventional breast MRI has not been used widely as a screening tool for women at average risk of breast cancer due to limitations including availability, cost and lengthy examination times.

Abbreviated breast MRI (AB-MRI) is a shortened protocol breast MRI examination that was developed to overcome these limitations.  It offers equal diagnostic accuracy, reduced scan time and cost, and unlike mammography is equally effective in all breast densities, requires no ionising radiation and no breast compression.6   Increasingly utilised internationally and now available to women of Australia, this powerful imaging test offers improved access to MRI and is providing a new approach to breast cancer screening.

The fundamental concept of MRI is to excite protons, the basic building blocks of tissues, by applying pulses of energy in a changing magnetic field.  The difference in signals that return from the various tissues is used to build 3D images of the breast.

Conventional breast imaging modalities such as mammogram and breast ultrasound rely primarily on structural changes in the breast to detect cancer.  MRI has the advantage of utilising contrast enhancement to obtain functional information of the breast tissues, distinguishing lesions with abnormal metabolic and vascular activity in the breast including both intraductal and invasive cancers.

It has been established by research over many years that MRI is the most sensitive imaging test available for the detection of breast cancer, regardless of breast density and across a wide range of risk profiles.5,6,7  MRI has been shown to have a sensitivity of over 90% as compared to 70% for digital mammography.7

Furthermore, studies have shown that when MRI is used, there is no significant additional benefit to cancer yield by adding mammography, ultrasound or both.6    MRI reduces the problem of “underdiagnosis” by detecting biologically active disease with preference for higher grade invasive and intraductal cancers that are prognostically significant.

It also reduces the problem of “overdiagnosis” of biologically inert, potentially prognostically insignificant disease that is detected by presence of distortions, spiculations or calcifications on mammography secondary to regressive, slower processes such as hypoxia, necrosis and fibrosis.  As many as one in three cancers detected on mammography are reported to be “overdiagnosed” as these cancers would not have resulted in death or symptoms.2,6

While earlier studies suggested limitations of MRI for detection of pre-invasive breast cancer, termed ductal carcinoma in situ (DCIS), more recent studies have confirmed that MRI is superior to mammography for diagnosing DCIS as well as invasive cancer.6

Until recently, breast MRI has not been widely used for screening of breast cancer in average risk women due to its limitations as well as misperceptions about the sensitivity and specificity of the test.  AB-MRI is starting to change all this.

The “short” AB-MRI protocol utilises data from a limited set of scans performed before and after administration of intravenous contrast to target for breast cancer.  Additional sequences performed in the “long” protocol used to further characterise lesions are not included in the abbreviated protocol as studies suggests that these do not aid with the rate of cancer detection.

AB-MRI has been shown to be equally sensitive as conventional “long” protocol breast MRI and more sensitive than mammogram or ultrasound for cancer detection.4,8  While much of the research for breast MRI has focused on screening of high familial risk groups, there is growing international evidence to support utilisation of AB-MRI for screening of the larger population women at average risk.4,6,7

AB-MRI scan has a negative predictive value of greater than 99%, providing the highest level of reassurance of disease-free status of any imaging test available.4,8

The AB-MRI technique can be used in any facility where MRI imaging equipment and specialist trained radiologists are available. It takes less than 10 minutes to perform the scan, typically only seven or eight minutes, with patients lying prone.

Reporting radiologists categorise lesions identified on AB-MRI according to standardised reporting systems such as the Breast Imaging Reporting and Data System (BI-RADS).

Lesions are typically numerically graded from 1 to 5 with increasing number reflecting increased likelihood of malignancy.  Those that are graded as 3 (probably benign) require either additional imaging with targeted ultrasound, or short term follow up AB-MRI in six months.  Lesions graded as 4 (suspicious) or 5 (highly suggestive of malignancy) are further investigated with biopsy.

MRI guided biopsy is possible in centres with dedicated equipment but is usually reserved for sonographically occult lesions, as it is less time efficient and requires relatively high cost MRI-safe equipment.

AB-MRI can be used for all breast tissue densities, but is especially appealing as an effective screening test for women with dense breast tissue.

Breast density refers to the proportion of fibroglandular relative to fatty tissue in the breasts.  Breast density cannot be reliably determined by the look, feel or size of the breasts.  Radiologists categorise breast density based on the appearance of the tissue on a mammogram, either visually or using computer aided assessment.  There are various classification systems used, all of which categorise breasts comprising 50% or more fibroglandular tissue as “dense”.

It is now understood that patients with dense breasts are at significantly increased risk of breast cancer.

One of the reasons for this increased risk is that most cancers develop in the fibroglandular tissue.  Mammograms are known to have reduced sensitivity in dense tissue which may mask signs of cancer such as a lump or distortion.  On a cellular level, dense breast tissue is also associated with increased inflammatory milieu and more stiff and fibrous tissue that promotes tumour growth.   Approximately half women in the screening age group (40-74 years) have dense breasts, with increased frequency in younger women.5,9

One Australian study revealed that nearly three quarters of these women are not aware that they have dense breasts and are at increased risk.9 These patients in particular could benefit from AB-MRI screening.

Currently there is no legislated requirement for breast density to be reported in Australia. In contrast, more than 35 states in the United States have legislation in place mandating that breast density be reported on mammograms and patients with dense breasts be informed of their increased risk and provided options for supplemental screening tests. AB-MRI is gaining growing attention as an excellent supplemental screening test for these patients as it performs equally well in dense as well as fatty breasts.

This multicentre trial including 1444 women found that AB-MRI detected significantly more cancers, (11.8 per 1000 women) than DBT (4.8 per 1000 women).   The sensitivity of AB-MRI for invasive cancer or ductal carcinoma in situ (DCIS) was significantly higher (95.7%) compared to DBT (39.1%).   All invasive cancers were detected by AB-MRI.  Only one case of DCIS was not detected on AB-MRI and detected by DBT alone.

The results of this study suggest that in patients with dense breasts undergoing AB-MRI the contribution of mammography or DBT is limited. This supports existing evidence for patients of various breast densities that mammography provides limited contribution to cancer detection when breast MRI is used.6

AB-MRI offers several other advantages.  A known limitation of mammographic screening is presence of breast implants, which can obscure some of the breast tissue and therefore potentially obscure a breast cancer.  AB-MRI is able to visualise and screen all of the tissue in women with breast implants, although the abbreviated protocol does not include dedicated sequences used to assess for implant complications such as leakage.

AB-MRI can be used in women with a history of breast surgery, to distinguish active residual or recurrent tumour around surgical sites, which can be difficult to distinguish from scar distortion on a mammogram. Another advantage that provides relief and great appeal to many patients is that, unlike a mammogram, AB-MRI requires no breast compression.

AB-MRI has been compared to another recent development in breast cancer screening that is Contrast Enhanced Mammography (CEM). CEM utilises a contrast injection in conjunction with mammographic views for detection of breast cancer.  CEM requires higher than usual radiation dose to the breasts when compared to standard screening digital mammography or breast tomosynthesis.10

Although sensitivity rates are in some studies similar, unlike CEM or standard mammography, AB-MRI requires no ionising radiation (X-rays). This is particularly appealing to patients concerned about radiation exposure. In view of all of the benefits, experts have suggested that AB-MRI might replace mammography altogether for breast cancer screening in the future.5,6

Currently, Medicare Australia provides rebates for screening long protocol Breast MRI for patients under the age of 50 who have high familial risk of breast cancer, accounting for less than 1% of the Australian population.11 Much of the research available on breast MRI has focused on the high sensitivity and improved mortality rates provided by breast MRI in the high-risk subgroup.6   The improved accessibility to MRI afforded by AB-MRI is particularly appealing for patients who have a family history of breast cancer but do not meet Medicare rebate criteria.

AB-MRI is becoming increasingly utilised by public and private health centres across Europe and the United States and more recently in a small number of sites across Australia. As a relatively new test, official guidelines for the use of AB-MRI for breast cancer screening are yet to be established. Australian Government breast cancer screening guidelines currently recommend women of screening age to have a mammogram every two years.12

In view of this this and until further research and guidelines regarding use of AB-MRI for screening are available, experts suggest that a reasonable approach may be for patients to have biannual AB-MRI scan on alternate years to biannual mammogram.

Mammographic screening has been shown to be associated with an interval cancer rate of 30 to 50%, meaning that approximately one third to one half of cancers occurring in a screening cohort will not be detected with mammography but will be detected clinically between screening rounds.3

Multiple studies have shown AB-MRI results in an interval cancer rate of zero.3 This leads to an appealing future potential of AB-MRI to enable prolongation of the screening interval for average risk women beyond the current recommendation of two years.

Breast cancer remains a significant cause of death of women in Australia and improved methods for detection are required.

Abbreviated Breast MRI offers a new approach to breast cancer screening and is now available in Australia. AB-MRI provides numerous advantages to traditional screening methods including high sensitivity in both patients at average and increased risk of breast cancer.  AB-MRI is gaining international attention and is the focus of ongoing research to determine its future role.

One thing that seems certain is that this new and powerful screening test is proving to be a game-changer in the fight against breast cancer.